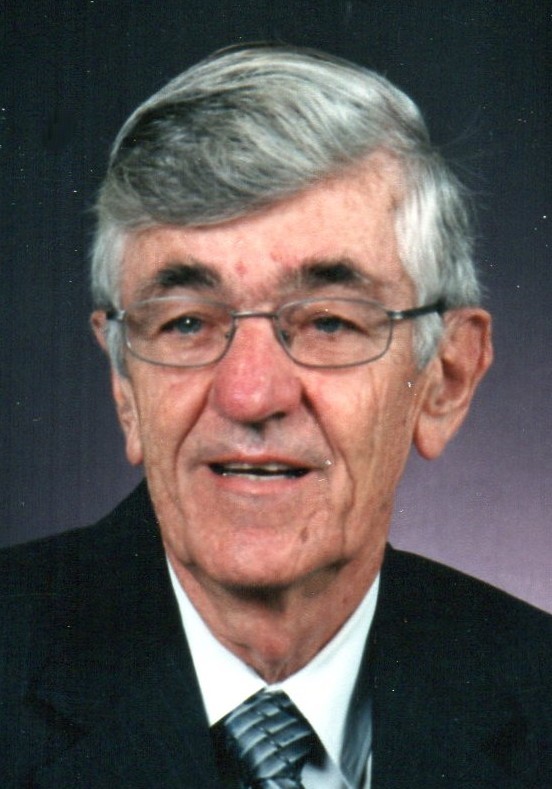 Funeral services will be held on Tuesday, February 14, beginning at 11 a.m., at First English Lutheran Church, with Rev. David Tonn officiating. Music will be provided by Amy Adelman, organist, and Jon and Carol Ydstie, vocalists.

Visitation will be held at the church Monday evening from 5 – 7 p.m. with a prayer service at 7 p.m. Visitation will continue one hour prior to the service on Tuesday. Casket bearers will be Bill's grandchildren and burial will take place at Mound Cemetery.

William Russell Hoel was born on March 3, 1930, in Ottowa, Kansas, to Gynther and Pearl (Tufte) Hoel. He grew up in Boulder, Colorado, Clovis, New Mexico, and graduated from Erskine High School in 1948. Following graduation, Bill attended North Dakota State University. During college, he left school to serve his country when his ND Air Guard Unit was activated during the Korean War. Upon discharge from the Air Force, he returned to NDSU and graduated with honors from the College of Pharmacy in 1955. On August 21, 1953, Bill was united in marriage with Donna Ness in Erskine, Minnesota. They were blessed with three children.

Bill practiced pharmacy in Fargo, North Dakota for eight years. He was then the pharmacist for Humphrey Drug in Huron, South Dakota while Hubert Humphrey was Vice President. Vice presidential visits to the store were exciting, including the secret service intrusions! Bill and his family moved to Ortonville in 1967, where he worked as a pharmacist until his 80th birthday. His colleagues made it clear that Bill practiced his profession with integrity and dedication.

Bill served the communities he lived in by being involved in a variety of organizations and boards. He was a member of Kiwanis, volunteered for Habitat for Humanity, Rice Hospice, and Kinship. He served on the Ortonville School Board. Bill volunteered in interdenominational efforts to bring Vietnamese and Cambodian refugee families to Ortonville. He even found himself driving a mom to the hospital so she could deliver twins! He frequently stopped by their homes to administer correct doses of medications. A man of deep faith, Bill was an active member of First English Lutheran Church, teaching Sunday school, serving on various boards, and as president of the congregation. He made a priority of sharing his faith with family and friends. Bringing his family to Outlaw Ranch Family Bible Camp was paramount for Bill.

In his free time, Bill loved fireworks, gardening (including composting!), fishing, boating, and teaching his children, grandchildren, and friends to ski. His zest for life will be deeply missed.

Bill was preceded in death by his parents and his brother, Richard.