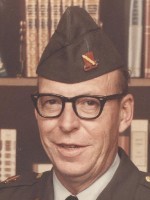 Funeral services will be on Friday, October 10, 2014, at 10:30 a.m. at the Elim Lutheran Church in Clinton. Pastor Bev McNeill will officiate and burial will be in the Clinton City Cemetery. Visitation will be from 5 – 7 p.m. on Thursday, October 9, at the church and continue for one hour before the service.

Wallace Carlyle "Butch" Sigler was born on June 7, 1939, on the Schlimme Farm, 7 miles west of Clinton. He was the son of Alvin and Fern (Schlimme) Sigler. Butch attended country school until the 7th grade, when he enrolled at Clinton. He graduated from Clinton High School with the class of 1957. In January 1958, Butch enlisted with the United States Army. Butch was united in marriage to Hildegard Puhler in 1962. They were blessed with two children: Randy and Marion. During his military career, he served in Vietnam, and resided in Germany, Alabama, and numerous other Southern states. Butch retired from the Army in 1984 and moved back to Minnesota. In 1987, he married Yvonne Athley and had two children: Cassidy and Cody. Butch worked various jobs until his health began failing. In 2008 he entered Golden Living in Milbank, later moving to Grace Home in Graceville.

Butch enjoyed playing pool and keeping up to date on sports, especially the Twins and the Vikings. He especially enjoyed visiting and was appreciative of those who came to see him. He was always willing to help out a friend in need. Butch was very sociable and enjoyed joking around with friends and family.

He was preceded in death by his parents; brother, Todd; and brother-in-law, Howard Herberg.