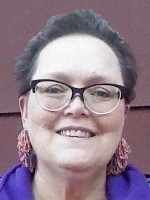 Mass of Christian Burial will be held on Wednesday, January 21, 2015, at St. Anthony's Catholic Church beginning at 10:30 a.m. Visitation will be held one hour before Mass.

Father David Breu will officiate and music will be provided by Norma Jung and St. Anthony's Funeral Choir.

Vicki Ann Dew was born on October 22, 1958, in Graceville, Minnesota to William R. and Helen L. Cooper Dew. She graduated from Browns Valley High School in 1976. She attended Granite Falls AVTI for one year.

In June of 1978, Vicki enlisted in the United States Navy and proudly served as a hospital corpsman until March of 1999, retiring as a Chief Petty Officer. She was with Fleet Hospital 5 in Desert Storm/Desert Shield, the first field hospital set up during that conflict. A memorable experience for her during her career was the work she did at an orphanage in Romania.

Upon retirement she moved to Willmar, Minnesota and began working for Walmart, a career she held for almost 17 years. She also worked part time at Divine House in Willmar, and lovingly referred to the clients as "her boys".

Vicki was diagnosed with Mantle Cell Non-Hodgkin's Lymphoma in 2013 and in October of that year she received a bone marrow transplant.

Vicki was a giver and always put others first. She was very involved in the American Cancer Society's Relay for Life in Kandiyohi County, never turning down an opportunity to volunteer on their behalf, and she was passionate about fundraising for this organization. Her team, "Walmart Sam's Smiling Striders", raised the greatest amount of money several years in a row. For many years she helped with the United States Military Historical Collection, a yearly display of memorabilia (thousands of items) held on Veteran's Day in Willmar. Vicki delivered Meals on Wheels and she was honored by having the employee cafeteria at WCI named after her. Her home was always open to those who needed help. Vicki loved animals, especially dogs. She collected angels and enjoyed handiwork of many kinds. She was a member of St. Mary's Catholic Church in Willmar.

Vicki was preceded in death by her parents and her niece, Melissa.

In lieu of flowers, the family requests donations be given to "Walmart Sam's Smiling Striders", Vicki's team for Relay For Life.