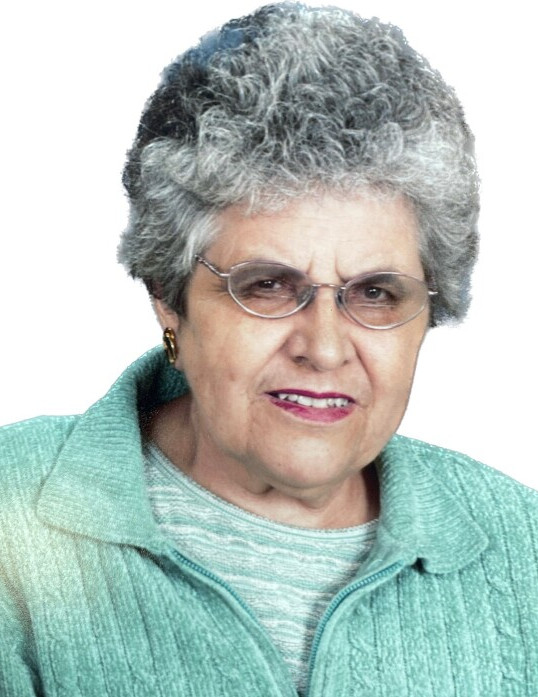 Veronica “Fronie” Adelman, age 83 of Ortonville, MN, passed away on October 6, 2022, surrounded by her loving family.

A Mass of Christian Burial will be held on Tuesday, October 11, 2022, at 11:00 a.m. at St. John's Catholic Church in Ortonville. Father Jack Nordick will officiate the Mass.

Veronica Agnes (Scherer) Adelman was born on June 9, 1939, in St. Joseph, MN. She was the daughter of Math and Elizabeth (Lahr) Scherer. She was lovingly called “Fronie” and carried that name throughout her life. Fronie grew up and attended school in St. Joseph. She graduated from Cathedral High School with the Class of 1957. She continued her education and graduated from St. Cloud Business College. She worked as a bookkeeper for a few years. Fronie was very active in Rural Youth where she met Irvin Adelman at a square dance. They were united in marriage on June 12, 1962, at St. Joseph’s Catholic Church, St. Joseph, MN. They were blessed with eight children.

The family settled on a farm near Rosen, MN. Together, Irvin and Fronie farmed and raised their family. Fronie was a hard-working farmwife. She worked beside her husband and provided for her family. She grew a large garden and canned or froze her harvest. Her family cherishes the memory of the smell of fresh baked bread and cinnamon rolls, which she baked almost every day. She always had room at her table for unexpected guests, and could create a delicious meal from almost anything.

Fronie loved her family! She was a 4-H Leader while her children participated in 4-H. She was selfless and always put her husband and children ahead of herself. A great blessing was the title “Grandma”. She loved her grandchildren and great-grandchildren. She had fun playing with them, even crawling on the floor like a kitty! She provided a home filled with love and laughter. It was a wonderful place to be!

Fronie was a faithful member of St. Joseph’s Catholic Church in Rosen, and later St. John’s Catholic Church in Ortonville. She instilled the Catholic faith within her family. Her faith helped her survive the loss of her son, Steven in 1994. A piece of her heart was lost again, when she lost the love of her life, Irvin, in 2009. Many days were a struggle but her faith, children, and grandchildren kept her going.

Fronie was surrounded by her loving family on October 6, 2022, as her earthly journey ended.

Her family extends a special thank you to the staff at Fairway View Community for the loving care these past 12 years.