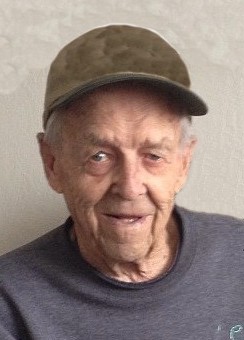 Funeral services for Vernon Goldsmith will be held on Sunday, March 12, at 2:00 p.m. at Tabor United Methodist Church in Big Stone City, SD. Pastor Melanie Reiners will officiate and burial will be in Greenwood Cemetery. Visitation will be held at the church one hour prior to the service.

Vernon Donald Goldsmith was born July 31, 1918, near Clinton, MN. He was the son of Howard and Christine (Berg) Goldsmith. He was baptized in a church east of Clinton and later confirmed at First English Lutheran Church in Ortonville.

Vernon grew up and attended rural school in the Clinton area. Following his education he worked on the family farm. Vernon was united in marriage with Gertrude Diers on September 7, 1944, at St. Paul's Lutheran Church, Chokio, MN.

Vernon and Gertrude were blessed with four children: Pat, Richard, Jan, and Mary. The family moved to Big Stone City, SD in 1947. Vernon worked various jobs including carpentry work, at the Big Stone Canning Factory, and at Farm & Home Lumber.

Vernon was a faithful fan of Minnesota Twins Baseball and Vikings Football, watching or listening to as many games as he was able. His favorite baseball team was the New York Yankees. He loved the outdoors and gardening. During his younger years he enjoyed trapping. He was an avid bird watcher and fed many birds! He liked to tinker with things – always enjoying taking things apart and attempting to put them back together. He adored his grandchildren and great-grandchildren and had a special place in his heart for their pets.