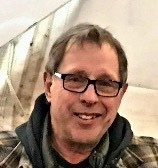 Tom Goergen, age 70, of Ortonville, MN, passed away unexpectedly on September 3, 2022, at Sanford Hospital in Fargo, ND, with family by his side.

A memorial Service will be held on Saturday, October 8, 2022, at 2:00 p.m. at Neilson Park in Ortonville, MN. Visitation will be held one hour prior to the service at the park with a luncheon to follow. Inurnment will be at Mound Cemetery at a later date.

Thomas Ray Goergen was born on February 14, 1952, in Wheaton, MN, to George and Grace (Keller) Goergen. He graduated from Ortonville High School in 1970. After graduation, he went on to serve in the United States National Guard.

Tom worked as a carpenter for much of his life, always looking to create one-of-a-kind uniqueness in his projects.

Tom enjoyed the outdoors, fishing and gardening were a few of his favorite pastimes. But more than anything he enjoyed watching his grandkids play sports.  He treasured spending time with his kids and grandkids, telling stories, playing swords and games, and almost always goofing around. His grandchildren adored him, and he couldn’t have been a prouder grandpa.

While he enjoyed relaxing with a good book or game on TV, he also loved to socialize and reminisce with friends and have a good time. He will be missed dearly by those who knew him. His stories, personality, and kind heart will forever be remembered by family, friends, and all whose lives he touched along life’s pathway.

Tom is preceded in death by his parents; and baby sister, Lori Jean.

In lieu of flowers, please make a donation to a local or favorite charity of your choice.