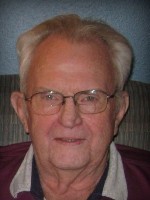 Funeral services for Steve Thorson, 78, of Clinton will be held on Saturday, May 10, 2014, beginning at 2 p.m. at Trinity Lutheran Church in Clinton. Rev. Bev O'Neill will officiate and burial will be in the Clinton City Cemetery.

Visitation will be held Friday evening, May 9, from 5 – 7 p.m. at the Mundwiler and Larson Funeral Home of Clinton – Moberg Chapel and continue the next morning at the church one hour prior to the service.

Stephen Merle Thorson was born January 26, 1936, on the farm homesteaded by his family in 1883. Steve was baptized and confirmed at Trinity Luthern Church in Clinton, Minnesota. He attended Clinton Public School and graduated from Clinton High School in May of 1954. After high school he joined the United States Air Force. He was stationed at the Eglin Air Force Base in Pensacola, Florida. While in the Air Force, he was trained as a member of the Armament & Electronics Maintenance Squadron. While on leave, he returned home to marry Ellen Mae Fish. Steve and Ellen were united in marriage on January 3, 1958, at Trinity Lutheran Church. Steve and his new bride returned to Pensacola where they lived until his hitch in the Air Force was completed. While in Florida, they welcomed the arrival of their first son, Stephen Douglas.

Upon discharge from the service the young family returned to Clinton, Minnesota to continue life on the family farm. In 1960 the family expanded with the arrival of a second son, Mark Allen. Then in 1961, their third son, David Lee, arrived. The crops in the field were not the only thing that flourished down on the farm. To supplement his growing family, Steve opened "Thorson TV Repair Service." The seasons came and the seasons went. In June of 1965, a daughter, Kristi Jean, was born. The family was now complete.

Steve enjoyed the great outdoors. Hunting, fishing and working on the farm was his way of communing with nature. Steve always enjoyed music. Classic Country and Gospel were his chosen favorites. Often he could be seen singing as he rolled up and down the fields on his tractor.

During the CB era, Steve's handle was "Tiny" (his childhood nickname) and the farm became known as T-Hill. It was well known that the coffee pot was always on. Morning coffee guests were a daily event. The Wednesday Night Bowling League gathering was also a frequent occurrence on the farm. Knowing how to bowl was not a requirement for this crew! Good food, good friends, and fellowship were order of the day.

The family continued to grow with the additions of a daughter-in law, Lori (Mark); a son-in law, Steve (Kristi), and a total of six grandchildren: Kaylee Jo, Ryan, Shane, Collin, Riley Rae Ellen and Nathan. Steve found joy and comfort being surrounded by his family and friends. He died on April 7, 2014, in Sioux Falls, South Dakota having reached the age of 78.

Cherishing his memory are his children and grandchildren, and his brothers: George (Krista) Thorson of Kalispell, MT, and Charles (Carol) Thorson of Clinton, MN.

Steve was preceded in death by his parents; his beloved wife, Ellen; and his Niece and Goddaughter, DawnMarie.