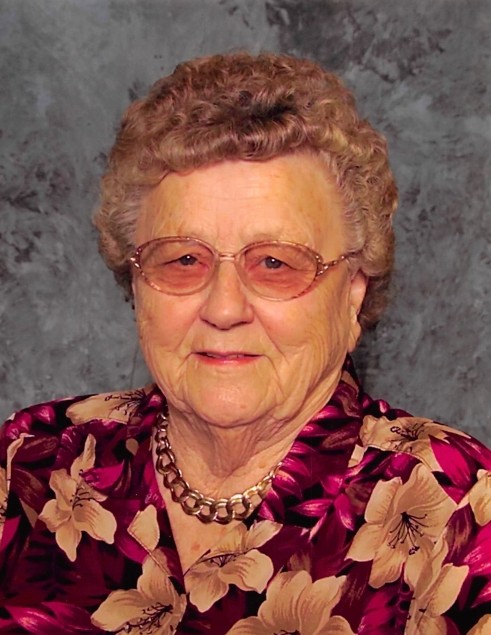 Stella Adelaide (Nelson) Jacobson was born on February 15, 1923, to Bennie and Anna (Steen) Nelson at their home in rural Clinton, MN. She was baptized at St. Pauli Lutheran Church in rural Clinton on March 22, 1923, by Rev. Moe and was confirmed at Trinity Lutheran Church in Clinton on June 13, 1937. She lived with her parents and five brothers on a farm. Following graduation from Clinton High School in 1940, she attended Teacher’s Training in Ortonville and then taught in Districts #9 and #10. She loved teaching and spoke often of her students, the families she stayed with, and all the work of running a one-room schoolhouse.

At a dance at Sioux Historic, she met Oscar Jacobson and they were married on November 22, 1947. To this union, three daughters were born: Elaine Marie, Bonnie Jean, and Mary Jo. They farmed on the Jacobson family farm east of Clinton until their retirement to their new home in Clinton in 1980. Most of Stella’s life was spent as a homemaker, except for the years she was employed at the Clinton Post Office.

Stella was a member of the Clinton Legion Auxiliary and the Almond Homemakers, along with being a Girl Scout leader for several years. She is remembered for her beautiful handwriting and for writing letters to so many. Other pastimes included embroidery work, jigsaw puzzles, reading, music, and card playing, especially with her grandchildren. Being a member of the Trinity Lutheran Church was very important to her throughout her lifetime. She taught Sunday School and especially enjoyed her circle and quilting groups which she attended faithfully until she entered the Clinton Care Center in 2015. In the summer of 2017, she moved to Grace Home in Graceville where she passed away on Monday, May 27, 2019, at the age of 96.

She was preceded in death by her husband, Oscar in 1999; infant son, Dayton; parents: Bennie and Anna Nelson; and brothers: Ted, Arlan, and Donald.