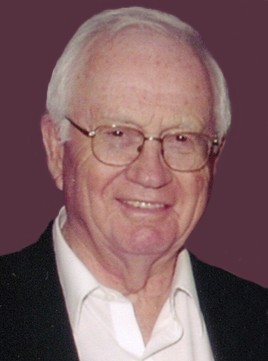 Funeral services will be held on Friday, August 14, 2015, at 2:00 p.m. at Trinity Lutheran Church in Clinton with Minister Bev McNeill officiating.

Visitation will be held at the church from 5-7 p.m. Thursday, August 13, and will continue for one hour prior to the time of service at the church on Friday.

Sevrin Giere (Sev) Steen was born April 10, 1927 in Clinton, MN, the son of S.P. and Amy Steen. He was baptized April 15, 1927 and confirmed June 1, 1941 at St. Pauli Lutheran Church of rural Clinton, MN. Sev graduated from Clinton High School in 1945, and enlisted the US Navy where he served at the US Naval Hospital in San Diego. Following honorable discharge in December 1946, he attended St. Olaf College, graduating in 1950. He later completed graduate banking courses at the University of Colorado.

Sev's life centered on the community of Clinton in many ways. Following graduation from St. Olaf, he returned to Clinton to work alongside his father at the Clinton State Bank. Sev purchased the bank in July 1967. The bank grew steadily and conservatively under his leadership, weathering many ups and downs in the farm economy. For Sev, time spent "running down to the bank" was sacred. In a career that spanned 62 years, he served thousands of farmers, businesses, students, families and individuals. Their stories of faith, gratitude, and trust were collected over many years – and were among Sev's most valued memories.

A lifelong member of Trinity Lutheran Church in Clinton, MN, Sev was also serious about his faith. It was there that he met Patti Oman one Sunday, as they sat together in the same pew. They were married February 15, 1958. Together, they served the congregation in many ways, as choir directors, musicians, and church committee members. From Sev, we learned the importance of commitment, stewardship, and how to sing in harmony.

Sev will be remembered as a golfer, woodworker, traveler, and champion for the community in which he spent nearly his entire life. None of these was taken lightly. Each was pursued with passion and an ever-present striving for improvement. Balancing work pressures with hobbies, Sev sought out golf lessons and piano lessons – even into his eighties. He golfed and walked several times per week. Traveling throughout the world fed a creative spirit that was so deeply rooted at home in Clinton. He and Patti visited dozens of countries throughout Asia, Europe, and Africa. He was especially proud that they visited his beloved Norway, but Sev was always ready with a story from Egypt, Russia, their latest cruise, or winters in Arizona. But it was Clinton that he loved. Believing that a strong community should be served by a clinic, Sev helped recruit many doctors and dentists to the area. He served on the school board, local commercial club, and many other civic organizations. He attended nearly every sporting event and school activity as his children, Paul and Jim, grew older. And he tirelessly supported local businesses, healthcare facilities, sports teams, and the church throughout his life.

Sev passed away peacefully at his lake home near Alexandria on August 6, 2015 after a mercifully short struggle with aggressive cancer. He was preceded in death by his wife Patti Steen, parents S.P. and Amy Steen, and sister Dorothy Marie Hofstad. Sev is survived by two children, Paul (Melissa) Steen of Edina, MN, and James Steen of Fargo, ND; two sisters Ruth (Rod) Hauck of Denver, CO, and Sylvia Loy of Benson, MN; and two grandchildren, Maya and Bennett Steen – as well as many nieces and nephews.


Condolences can be sent to: