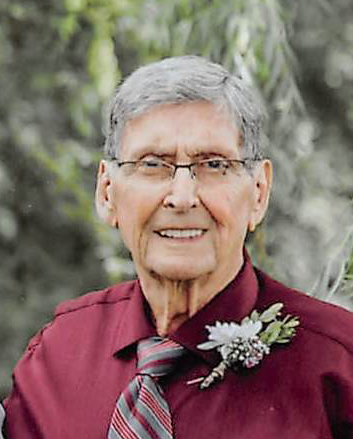 Mass of Christian Burial will be on Wednesday, October 31, 2018, at 10:30 a.m. at St. Charles Catholic Church in Big Stone City. Visitation will be held one hour prior to the service at the church. Burial will be in Mound Cemetery, Ortonville.

Roger Allen Gruenwald was born on March 16, 1936, in Hamlin Township in Lac Qui Parle County. He was the only child of Reynold and Glenda (Lusk) Gruenwald. As a young boy, they lived in Saint Cloud, Minnesota, and later moved to Dawson, Minnesota, where he started grade school. Roger was in second grade when they moved to Ortonville. He graduated from Ortonville High School in 1954. He enlisted in the Minnesota National Guard prior to graduating from high school.

On May 25, 1957, Roger was united in marriage to Phyllis Lubbesmeyer – his high school sweetheart – at the St. Charles Catholic Church in Big Stone City where he later became a member. They were in love for 65 years and married for 61½ years. To this union, four children were born.

Roger and Phyllis made their first home in Waukegan, Illinois. After 1½ years, they decided to move back to South Dakota to start their family.

Roger started working for the Ortonville Farmers Elevator in 1958. After 20 years, he took over as manager - a position he held for another 20 years. He was active on the Big Stone City Fire Department for many years. He retired in 1998. After retirement, he enjoyed trap shooting, hunting, fishing, golf, and helping his son-in-law with field work. He loved his grandchildren with all he had. Roger and Phyllis enjoyed many trips to the Missouri River. Later in life, he enjoyed trips to the River with his grandson and trips to Deadwood with his daughters.

He was preceded in death by his parents; mother-in-law, Elizabeth Lubbesmeyer-Bergseth; son-in-law, Terry Taylor; and aunts, uncles, sisters-in-law and brothers-in-law.