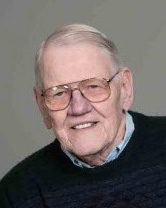 Bob was born on January 19, 1938, to parents Robert Sr. and Helen (Holmberg) Hasslen in Ortonville, Minnesota. He was baptized and confirmed at First English Lutheran Church and graduated from Ortonville High School in 1956. He attended college at SDSU in Brookings and U of M in the Twin Cities. He worked for several years at Pepsi Cola in Watertown SD.  In 1969 he graduated from Control Data Institute and worked in computer programming for the rest of his career.

On November 30, 1957, he married JoAnn Roelke at Zion Lutheran Church in Ortonville. Over their 63 years together they lived in Minneapolis, MN, Watertown, SD, Delaware, OH, and various suburbs of the Minneapolis area.  In 2001 they retired to their home on Big Stone Lake and recently moved into Big Stone City.  Bob and JoAnn had three children: Robert III, Rebecca and Stacy.

In his younger years Bob was an avid hunter and always looked forward to hunting season.  He was a terrific golfer and spent many hours on the golf course. He enjoyed fishing and boating and loved living on the lake.  Bob was an excellent cook, and for the last 30 years has done most of the cooking for the family. He enjoyed cooking shows and loved trying out new recipes. He was also an avid reader.

Bob was preceded in death by his parents; daughter, Stacy Schablin; and brother, David Hasslen.