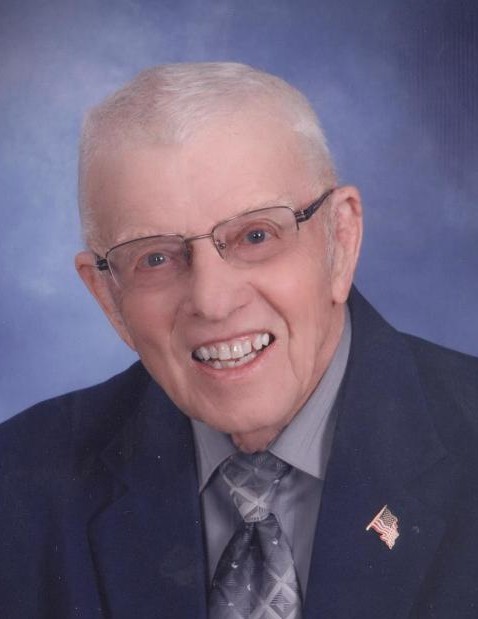 Raymond Merlin Bergeson was born to Bernard H. and Cora (Gilbertson) Bergeson on August 13, 1922, at home in Dawson, MN. He was baptized and confirmed at Riverside Lutheran Church in Dawson. Ray graduated from Dawson High School in 1940. Ray served in the U.S. Army Air Corps as a crew chief and was in counter intelligence from 1943 to 1946.

Ray worked at Douglas Aircraft in Venice, CA, managed IGA and Super Valu Grocery Stores. While managing  Super Valu in Redwood Falls, MN, he met Lois Ann Meyer. They were married on May 31, 1953. To this union three sons were born.

Ray was in the insurance and banking business most of his working years and owned a credit bureau for a short period. He was employed by Norwest Bank in Ortonville for 20 years.

Ray and Lois lived in Redwood Falls, MN, Dawson, MN, Blue Earth, MN, Paynesville, MN, and Ortonville, MN. He was a member of First English Lutheran Church. He was an officer, Sunday School teacher, usher, and youth adviser. In the community, he started the Saturday Quarterback Club, served on the OAHS board of directors, coached many ball teams, and served on many committees.