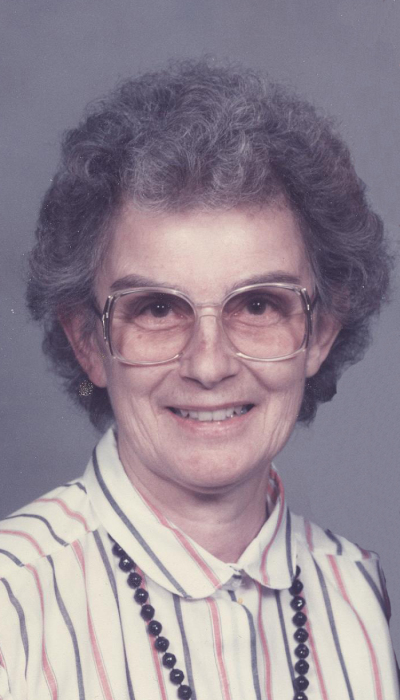 Pearline Mae (Palmer) Rakow was born on May 25, 1925, in Fairview Township, Osceola County, Iowa, to Bert and Sophie (Hattendorf) Palmer. She was the third child in a family of four daughters. Pearline was baptized into the Christian faith on July 30, 1925, and was confirmed into the Lutheran faith at St. John’s Lutheran Church in Dumont, MN, on August 28, 1938.  She attended Fairview rural school until she moved with her family to a farm near Bigelow, MN. While living there, she attended the Bigelow Consolidated School.

In December of 1937, Pearline and her family moved to a farm northwest of Graceville and she attended school at District #11. She furthered her education by attending Graceville High School and graduated as Salutatorian in 1943. With World War II going on, Pearline stayed home and helped her parents on the farm except for the time she graded eggs for Swift and Company and worked in the bakery.

In the fall of 1949, she moved to Graceville. On March 6, 1950, she started working for Northern Bell Telephone Company as an operator, and on November 15, 1957, she took over the position as chief operator and held that position until Graceville went to dial service in 1962.

Pearline was united in marriage to Eldon Rakow on May 20, 1961, at Mount Olive Lutheran Church in Graceville. She worked at Holy Trinity Hospital for 25 years as a receptionist and doing office work. She was transferred to Grace Home and worked in the Activity Department for four and a half years. Pearline was an active member of Mount Olive Lutheran Church attending Sunday services regularly, going to Bible study, and serving on the Altar Guild. She served as secretary/treasurer of Aid Association for Lutherans and helped with many benefits in the community. She also was a volunteer at Graceville Public Library for many years. She loved to travel and see different places and meet other people.

Pearline enjoyed all the simple things and things that money could not buy. She was a great lover of nature and enjoyed the twinkling of the stars, beautiful sunsets, rainbows, clouds, and everything that nature had to offer. She loved flowers of any kind and loved to work in the garden. Pearline firmly believed that everything she had belonged to God and that He gave them to her as blessings for her to enjoy and use. She recognized God’s right to take them back if He so choose. This was true the night that God choose to take her dear husband home to Heaven when he suddenly passed away on December 20, 1997, at a friends’ home after an evening of fun. She was a firm believer in the Golden Rule – always treating people like she would wanted them to treat her. She was always willing and ready to help someone in need. She did the best work she could at any and every job because she said she was working for the good Lord.

Pearline’s favorite Bible verse was Romans 8:28 - “And we know that in all things God works for the good of those who loves Him.” This verse was an inspiration for her in many times of trouble and sorrow, even though she sometimes never knew why but she still firmly believed it was true. God never answered her prayer that she would be a mother, but she never doubted God’s promise; she was like a mother to her nieces and nephews. She and Eldon had close ties to a dear family in Kentucky and considered them as their own.

Pearline enjoyed gardening, raising flowers, putting puzzles together, and doing all kinds of crafts. She also had a large doll collection. She loved to dance, but that came to an end after her husband had his leg injury.

Pearline is survived by many nieces and nephews; special family, Roger (Barbara) Bucklin and their daughters: Melanie and LeAnn and their husbands all of Kentucky.

She was preceded in death by her parents; husband; three sisters; one nephew; and one niece.