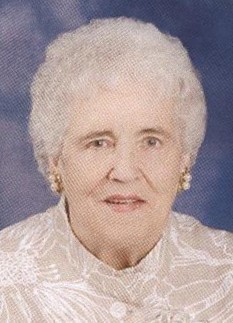 Norma Jean Burdick, 86, of Ortonville, who died on December 11, 2016. Funeral services will be held on Saturday, December 17, at 11:00 a.m. at First English Lutheran Church. Visitation will be held one hour prior to the services at the church. Rev. David Tonn will officiate. Music will be provided by Marilyn Hanson and Paula Tobin. Urn bearer will be Linda Anderson. Burial will take in place in Mound Cemetery at a later date.

Norma Jean Burdick, the daughter of Neal and Ruth (Peterson) Brown, was born December 25, 1929, in Ortonville, MN. Norma Jean attended school in Ortonville, graduating with the class of 1947. In 1947, she was crowned the first queen of the Ortonville Corn Festival. She attended First English Lutheran Church her entire life and was baptized, confirmed, and married in that church. On November 8, 1947, Norma Jean was united in marriage to Gene Burdick. To this union four children were born.

Norma Jean started working at the Ortonville Hospital as an aide and eventually moved to the x-ray and lab departments. When her last child moved away from home, she enrolled in the Watertown Technical College, earned a degree in nursing, and became an LPN. While working in Ortonville, Norma Jean was instrumental in starting the hospice program. She continued working as a nurse for 23 years until her retirement in 2003.

Norma Jean had many passions in life but especially enjoyed shopping and antiquing whenever she was able. She amassed a large collection of collectibles and enjoyed showing them to friends and family and was always on the hunt for more! In between shopping and antiquing, she was always decorating her home, especially around the holidays and would decorate for anyone who asked!

Norma Jean was a very involved member of First English Lutheran Church where she served on numerous boards and committees. She was also a charter member of the Ortonville VFW Women's Auxiliary. She had many wonderful trips traveling the United States and spending summers at the Ashby Resort. Norma Jean loved life, and loved being surrounded by friends and family.

In lieu of flowers, donations to Rice Hospice are welcomed.