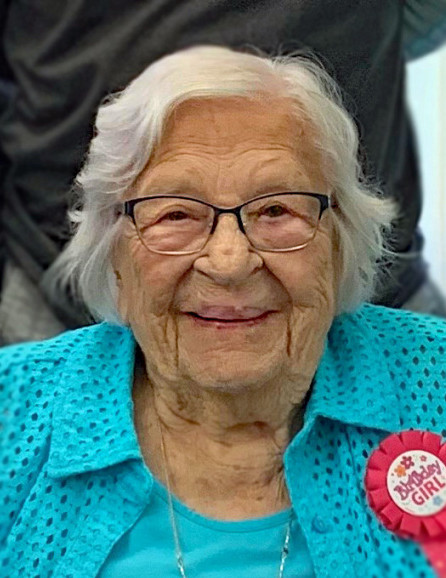 Memorial services will be held on Saturday, July 23, 2022, at 11:00 a.m. at Tabor United Methodist Church in Big Stone City, SD. Visitation will be held one hour prior to the service at the church on Saturday. Reverend Barbara McKewin and Reverend Dave Tonn will officiate the service and inurnment will be at Mound Cemetery in Ortonville, MN.

The service will be livesteamed and recorded and viewable at the bottom of this page.

Muriel (Birmingham) Geier was born on August 21, 1919, in Sevastopol, Door County, WI, to parents, Aberdeen G. and Leola (Jensen) Birmingham. She was baptized in the Moravian Church of Sturgeon Bay, Wisconsin.

In 1926, Muriel moved with her family to Janesville, Wisconsin where she attended school, graduating from Janesville High School in 1938. Muriel was employed as a teletype operator at General Motors until 1944. She then joined the Navy WAVES, serving for two years at Treasure Island, San Francisco, California. She was honorably discharged in March 1946. On June 22, 1946, Muriel was united in marriage to James Roy Geier. In 1948, Muriel and Jim moved to Ortonville, MN, where they made their home. Their marriage was blessed with one son, James Roy Jr.

Muriel was a member of the Evangelical United Brethren Church (now Tabor United Methodist Church) in Big Stone City, S.D. for over 70 years. She served as a Sunday school teacher for many years, was the leader of the Youth Fellowship Group and became a member of the Young Adults Builders Club. As a member of the Women's Society of World Service for 64 years, Muriel's main church interest was the Home and World Mission Field. She also enjoyed being a member of the Living Room Dialogue group for 50+ years. Muriel was a 75-year member of the Spink Dobak American Legion Post #97 serving as commander in 1949, and later as historian. Muriel accepted the Senior Leadership position to the Girl Scouts Organization of Ortonville in 1948, and worked with scouting for 36 years. Each year she took all the girl scouts camping and led the senior girls on a trip. She also escorted busloads of girls to Washington D.C., Massachusetts, Tennessee and Canada. Muriel served on the Peacepipe Council Board for many years and was a delegate to the Peacepipe Council National Girl Scout Foundation in Dallas, Texas. She was presented the Peacepipe Council Juliette Low World Friendship Medal in 1978, one of six women recipients in the United States. Muriel also read at the story hour for children ages 4-5 at the Ortonville Library for 38 years.

She is survived by three grandsons: Jared (Allison), Eric, and Nathan (Kelly); as well as five great-grandchildren.

In lieu of flowers, the family suggests a donations to Big Stone Health Care Foundation.