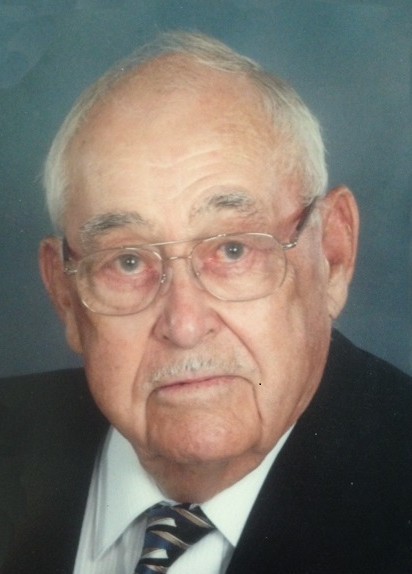 Funeral services will be held on Monday, March 20, at 10:30 a.m. at First English Lutheran Church in Ortonville.

Visitation will be held at the church on Monday, one hour prior to the service. Rev. David Tonn will officiate. Casket bearers will be Cory Howland, Justin Howland, Brad Lanemann, Val Rausch, Mark Mueller, and Darin VonEschen. Honorary bearers will be Morrie's friends and staff at Fairway View. Burial will be in St. John's Cemetery in Alban Township, Grant County, SD.

Morris Allen Howland was born on July 25, 1920, on a farm near Nielsville, MN, to Wiener and Mathilda (Hanson) Howland. He attended school in Nielsville and Climax, MN. He married Mavis Johnson on November 18, 1940, and to this union four children were born. They were later divorced. On February 2, 1969, Morrie married Alice Mueller. Morrie lived in Nielsville, Climax, and Shelly, MN before moving to the Big Stone Lake area. There he made his home in Ortonville, then Big Stone City, returning to Ortonville most recently.

Morrie owned Cashtown Cafe in Ortonville in the early 1970s. He worked in the grain industry for 35 years, including Peavey and Farmers Co-op Elevators. Upon retirement, Morrie worked for Unzen Motors for a short time.

Morrie raised and showed Arabian horses. He enjoyed golfing, gardening, and tending to his fruit orchard, which included apple, apricot, and pear trees. He gave much of his harvest away to family and friends. Morrie loved baking Norwegian treats to share with others and was also a three time world champion lefsa maker!