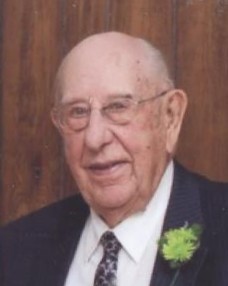 Funeral services will be held on Friday, January 2, at 10:30 a.m. at Trinity Lutheran Church in Ortonville with Rev. Dennis O'Neill officiating. Burial will follow in the Mound Cemetery. Visitation will be held from 5-7 p.m. on Thursday evening at Mundwiler and Larson Funeral Home and will continue on Friday for one hour prior to the time of service at the church.

Martin Emil Strobel was born on October 21, 1922, to Frederick and Anna (Reimer) Strobel in Hardwick, MN. He was baptized on December 17, 1922 and confirmed as a member of St. John's Lutheran Church in Trosky, MN, on May 31, 1936. Martin was raised on the family farm and attended school through the eighth grade in Hardwick. He worked on the farm with his father until he entered the United States Army in 1944. While serving overseas in the Philippines and Japan during World War II, Martin served as a Sergeant with the Military Police. After his honorable discharge in 1946, Martin returned to Jasper and began working as a mechanic for John Deere.

On October 24, 1948, Martin was united in marriage to Gladys Fenicle at St. Paul Lutheran Church in Pipestone. In 1951, Martin and Gladys moved to Clinton, MN. To this union, six children were born. There he farmed with three of his sons; Craig, Mark and Bruce. Martin became a member of Trinity Lutheran Church in Ortonville in 1951, where he served as an elder and on the church council.

Martin enjoyed bowling, playing softball, and delighted in Gladys' cooking and baking. He loved farming with a passion, and he did so for the entirety of his life. Most of all, Martin loved his big family, each and every one; and was a very God fearing man.

He was preceded in death by his parents; four brothers: Ancel, Paul, Gordon, and Freemond; sisters-in-law: Charlotte Strobel, DeLoris Strobel, and Jeanine Strobel.