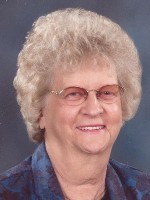 Visitation will be held at Mundwiler Funeral Home in Milbank on Wednesday evening from 5 – 7 p.m. with a Prayer Service at 7 p.m. Father Gary DeRouchey will officiate. Music will be provided by Sandy Tucholke, Audrey Mogard, Steve Karels and the St. Lawrence Folk Choir. Burial will be in the St. Lawrence Catholic Cemetery.

Marlys Annette Kelly was born on May 18, 1938, on her family farm in Roberts County, South Dakota to Tobias Edwin and Gladys Resbak Jacobson. When she was six years old her family moved to Summit, South Dakota. Marlys attended school through the 11th grade. On September 17, 1955, Marlys was united in marriage with Robert Michael Kelly at St. Lawrence Catholic Church in Milbank, South Dakota. To this union five children were born.

Marlys and Robert made their home in Milbank and she devoted her time to raising their children. Robert died on September 21, 1976. At that time Marlys started working as a nurses' aide, a job she thoroughly enjoyed. Marlys was a member of the VFW Auxiliary. She also volunteered at the hospital as a Pink Lady and at the Milbank Community Thrift Shop.

Marlys was a people person and liked to make people laugh! She collected angels and enjoyed flower gardening. Marlys traveled and her favorite trips were those to the Black Hills, Alaska, and California. She was close to her brothers and felt deeply blessed by their relationships. Time spent with her children and grandchildren were cherished moments.

Marlys was preceded in death by her parents, husband, and dear friend Carol Ann St. George.