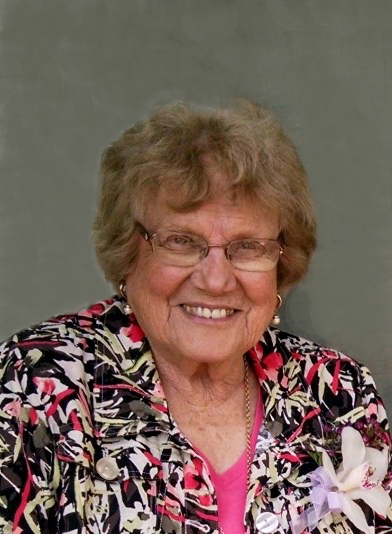 The memorial service for Marilyn Streich who passed away April 3, 2020, will be held Friday August 7, 2020, at 3:00 at Trinity Lutheran Church in Ortonville, MN.  State of Minnesota COVID-19 safety protocol will be practiced.  If you are uncomfortable gathering and wish to remain home, know we understand and appreciate your thoughts and prayers.

Marilyn Katherine Bertha (Maatz) Streich was born on October 18, 1931, to Fred and Alma (Seefeld) Maatz in Walter Township of Lac qui Parle County, MN. She was baptized on November 5, 1931, and confirmed on April 29, 1945, at Trinity Lutheran Church, Walter Township, Bellingham, MN. Marilyn grew up on a farm near Bellingham and graduated from Bellingham High School. She graduated from Minnesota Business School in 1950.

On October 29, 1954, Marilyn was united in marriage with Herbert Streich. The couple lived in Tacoma, WA, while Herb served in the United States Army from 1955 to 1957. After Herb’s service, they farmed near Big Stone City, SD. They were blessed with five children. In 1989, Herb and Marilyn moved to Ortonville, MN. They spent their winters at Casa del Sol Park in Donna, TX, for 24 years.

Along with being a loving wife and mother, Marilyn worked as a legal secretary for the law office of Benson and Schreiner in Ortonville for many years. She was involved in 4-H as a club leader and enjoyed working with the youth. She was a confirmation teacher at Trinity Lutheran Church and active in the Lutheran Women’s Missionary League (LWML), serving on the district and zone levels.

Through the years, Marilyn enjoyed camping, fishing, playing cards, solving crossword puzzles, and spending time with her grandchildren. The family hosted an exchange student, Lavinia Corpuz, for one year.

Condolences may be sent to: