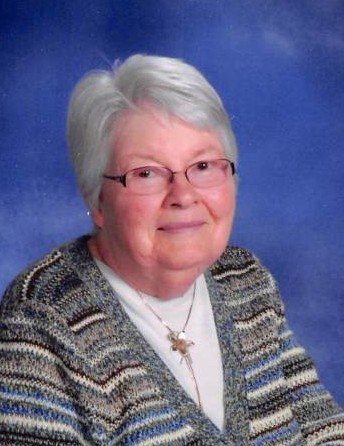 Mass of Christian Burial will be held on Friday, September 27, 2019, at 11:00 a.m. at Holy Rosary Catholic Church in Graceville.  Visitation will be held on Thursday from 5 – 7 p.m. at Mundwiler and Larson Funeral Home in Graceville.  A prayer service will be held at 7:00 p.m.  Visitation will continue at the church on Friday, one hour prior to the Mass.  Music will be provided by Deb Farwell, organist. The vocalists will be: Deb Stueve, Sandy Bauer, Chris Weick, and Jean Costello.  Honorary bearers will be Jean’s grandchildren: Jodie Bourgerie, Leah Krause, Sarah Penke, Nick Gauger, Chelsea Hauschild, Lucas Buller, Tyler Buller, Rebecca Krause, Kayla Hiedeman, and Nathan Vogt.  Casket bearers will be: Vince Powlish, Don Kehoe, Chuck Bauer, Vern Powlish, Ken Kehoe, and Steve Wiegman.

Margaret Jean (Taffe) Buller was born on January 3, 1933, in Graceville, MN.  She was the daughter of George and Nellie (McAloon) Taffe.  Jean grew up on the family farm one mile south of Barry, MN.  She attended school in Barry and then attended St. Mary’s Academy of Graceville, graduating with the Class of 1951. She continued her education at St. Mary’s Hospital School of Nursing in Rochester, MN, and earned a degree as a Registered Nurse in 1954. She then worked at Sister Kenney Institute for nine months.

Her future husband, Norbert Buller, was serving in the Army during the Korean War, and on June 11, 1955, they were married at St. Barnabas Church in Barry.  They moved northeast of Graceville, which was his parent’s home, and began their lives together.

Jean worked as a Registered Nurse at Holy Trinity Hospital in Graceville in 1955.  She took time off to raise their family of five children: Charleen, Linda, Neal, Alan, and Diane.   Jean went back to work on a part time basis in 1961.  She retired at the age of 65 after working for 36 years.

Jean was a faithful member of Holy Rosary Catholic Church.  She was an active member and helped out whenever she could.  She was a member of the American Legion Auxiliary.  She was proud of her Irish heritage - and loved the holiday parade in Graceville. Jean and Norbert moved to Grace Village in 2012.  Norbert passed away in 2013, and Jean resided there until her death.  Jean enjoyed the Birthday Club with her friends, and schedules were always made to never miss the coffee hour at Grace Village.

Jean was a thoughtful and caring lady and was “always a nurse.”  Her delicious pies, cookies, and breads will be missed.  She even taught her grandsons how to make pickles.  She enjoyed quilting, reading, canning, and freezing fruits and vegetables, and traveling with Norb in their “Winnie.”  She loved spending time with her grandchildren and spent countless hours volunteering wherever needed.