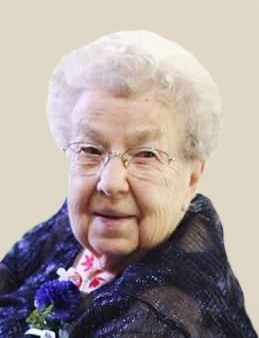 Margaret Louise Johnson was born on August 2, 1920, in Ideal Township, Crow Wing County, MN, to Charlie and Ella (Hallenborg) Ostlund. She attended Cross Lake Country School, high school in Brainerd, and graduated from Pequot Lakes High School. She was 11 when her father passed away and at age 13 Margaret began working at Bonnie Lakes Farm in order to help her family. After graduation, she worked for Dr. and Mrs. Badeaux as a maid, housekeeper, and assisted in the care of the doctor's aging mother and ill wife, until she and Forrest were married.

On October 2, 1953, Margaret was united in marriage with Forrest Johnson at Cross Lake Lutheran Church. This union was blessed with two children. At this time, Margaret no longer worked outside the home. Instead she devoted her time to being a dedicated wife and helpmate on the farm and a great mother. Family was most important to Margaret and she adored spending time with them. She left a legacy of faith.

Margaret was a very generous woman and will be remembered for her caring and giving nature. She loved to garden flowers and vegetables, canning and freezing her harvest. Margaret also had talent with crocheting and knitting and she enjoyed gifting each family member with a knitted afghan. She enjoyed collecting stamps, reading, and walking along with her family as they hunted deer.

Margaret accepted Christ as her Savior and was an active member of Artichoke Baptist Church in Correll, where she assisted with various church activities and taught Sunday School. Margaret also helped cook at Big Stone Camp For Christ for many years. She was a member of the Homemakers Club and volunteered at Northridge Residence in Ortonville.

She was preceded in death by her parents; husband, Forrest Johnson on August 16, 1983; two brothers; and unborn great-grandchildren.

In lieu of flowers, donations to Big Stone Camp For Christ are appreciated.