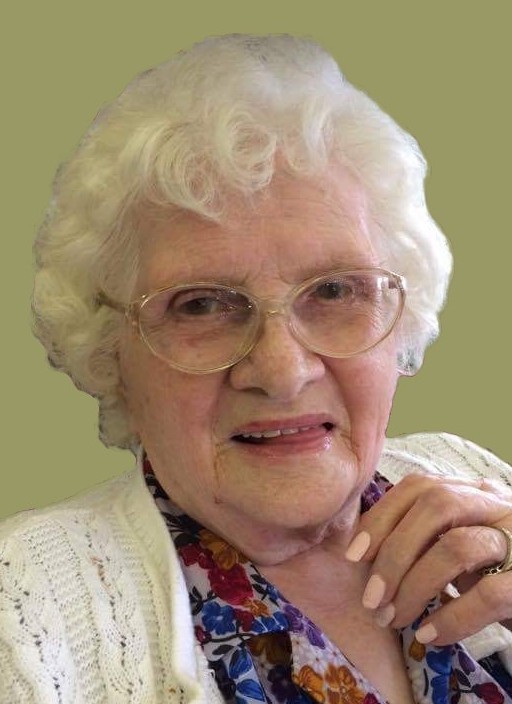 Visitation will be at the church on Thursday, one hour prior to the service. The organist will be Pat Radtke.

Leona Ida Augusta (Hillman) Zahn was born August 13, 1923, in the home of her parents, Herman and Louise (Vietzke) Hillman, north of Nassau, MN in Lac Qui Parle County. She was baptized and confirmed as a Lutheran and was raised with two brothers and one sister in Lac Qui Parle and Big Stone Counties.

Leona attended one year of school in Bellingham, MN and finished her education with honors at District #60 Country School, northeast of Ortonville. She loved school and continued her self- education with her love of reading and interest in science and nature.
On July 29, 1945, Leona married her beloved husband, Fritz Zahn. They lived in various country locations around Odessa. In 1955 they moved to their six acres of "prairie county living" and lived there 54 years. Leona remained on the farm another three years following Fritz's death in 2010. They raised four children and most of the food they ate. Leona loved gardening. With the help of her son, Johnny, Leona put up their vegetables, fruits, and meat each year. She also enjoyed baking bread and goodies. She was an excellent cook.

Leona would spend many hours on her flower garden and also enjoyed taking care of the chickens, ducks, family kitties, doggies, and bunnies. She was a very humble and kind woman.
Leona's favorite times were spent around her country kitchen table with her children, grandchildren, great-grandchildren and other family members. She loved having coffee and visiting with her Odessa Cafe girlfriends. Leona loved evening nature drives, scrapbooking, crocheting rugs, and embroidering kitchen towels. She had a way of making everyone she was with feel really special. Her children, grandchildren, and great-grandchildren absolutely adored her. She enjoyed life the most when she was with someone or doing something for someone.

In August of 2013 Leona moved into Northridge Residence in Ortonville with early dementia. There she enjoyed bingo and other activities. Leona enjoyed being taken care of by the caring staff. She loved being "babied" daily by her son, Johnny, who faithfully took care of her for over three years as her dementia advanced. One of her weekly highlights was the Sunday afternoon coffee gang and their lively talks around the table.

Leona's family is sad to let her go but our good Lord and her husband were waiting with open arms for her arrival. She is now in heaven and will be forever in our hearts.

She was preceded in death by her parents, husband, and two brothers.