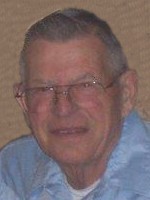 Funeral services will be held on Thursday, April 30, at 10:30 a.m. at First United Methodist Church in Ortonville.

Visitation will be held Wednesday evening from 5 – 7 p.m. at Mundwiler and Larson Funeral Home in Ortonville and continue at the church one hour prior to the service.

Rev. Melanie Reiners will officiate and music will be provided by Pat Kunz and JuliAnne French. Casket bearers will be Matt Bjerken, Doug Julius, Scott Bergherr, Jason Bergherr, Jerry Mielitz, and Steven Kohls. Honorary bearers will be the Staff from Northridge Residence and his Hobo Park Friends. Burial will be in Greenwood Cemetery in Big Stone City, SD.

LaVerne Floyd Mielitz was born on February 26, 1933, in rural Big Stone City, SD, to Arthur and Ruth (Whiting) Mielitz. He attended country school in Big Stone County and also in Graceville, MN. LaVerne served in the U.S. Army from 1956 to 1958. On June 5, 1960, LaVerne and Gayle Goetsch were united in marriage at Trinity Lutheran Church in Ortonville, MN. To this union three children were born. They made their home in Ortonville and he was a member of First United Methodist Church.

LaVerne enjoyed camping, fishing, garage sales, and antique tractors. He also enjoyed the time he camped at Hobo Park in Starbuck, MN, spending summers there for 23 years. He shared many cups of coffee with his friends there. It was important to LaVerne to spend time with his grandchildren and he spoiled them with ice cream and lighthearted grandpa teasing!

LaVerne was preceded in death by his parents; wife, Gayle, on March 26, 2014; brother, Larry Mielitz; brother-in-law, Donald French; and mother and father-in-law, Ervin and Delores Goetsch.