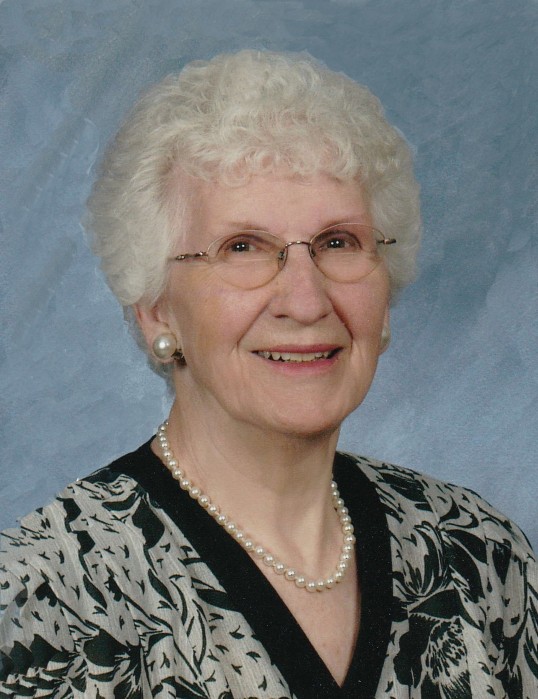 Graveside services will be held on Saturday, July 18, 2020, at 2:00 p.m. at Greenwood Cemetery in Big Stone City, SD, for immediate family only. The graveside service will be live-streamed and recorded and will be viewable on this website.

While maintaining social distancing guidelines, we are now able to gather for visitations and services. The use of face masks by attendees is requested. For those who prefer or require continued precautions, the graveside service will be live-streamed and recorded and will be viewable on our website.

Lamoine Mary (Ballhagen) Herrmann was born on April 15, 1928, in Roberts County, SD, to Frank and Vesper (Metz) Ballhagen. She was raised on the family farm in Roberts County and attended country school until eighth grade. Lamoine attended high school in Browns Valley, MN, and in Beardsley, MN, graduating in 1946 from Beardsley High School. On October 20, 1947, Lamoine was united in marriage with Ervin E. Herrmann at Beardsley Methodist Church. The couple farmed near Graceville and Clinton for about ten years. Ervin and Lamoine moved to Big Stone City, SD, in February of 1959. Lamoine worked at Ron’s Grocery Store for a few years, but mostly worked as a farmwife and caregiver for her two children. Lamoine was a member of the American Legion Auxiliary and served the Gertje-Van Lith Post 229 from 1967 to 1968. She served as Sergeant of Arms for several years. Lamoine also served on the Poppy Committee after joining the auxiliary and served as Poppy Chairman for 30 years. She was also a member of United Methodist Church in Big Stone City, an active member of Sarah Circle, United Methodist Women, and B Club. Lamoine served on the Election Board of Big Stone for several years as well.

She loved gardening, crocheting, collecting jokes, and dancing. She always organized large family reunions on July 4th in the park on Big Stone Lake. She loved people and tried to stay as involved with friends and family as much as possible. She and Ervin were able to do some traveling. They visited Hawaii, the Black Hills, Kansas, Tennessee, Nevada, Montana, Idaho, and took a cruise in the Caribbean. When she turned 88 years of age, she sold her house and moved to Grove, OK, so she could be closer to her daughter and son-in-law. She lived in a nice apartment in the Retirement Village for three years, then moved to Assisted Living and Nursing Home for one year.