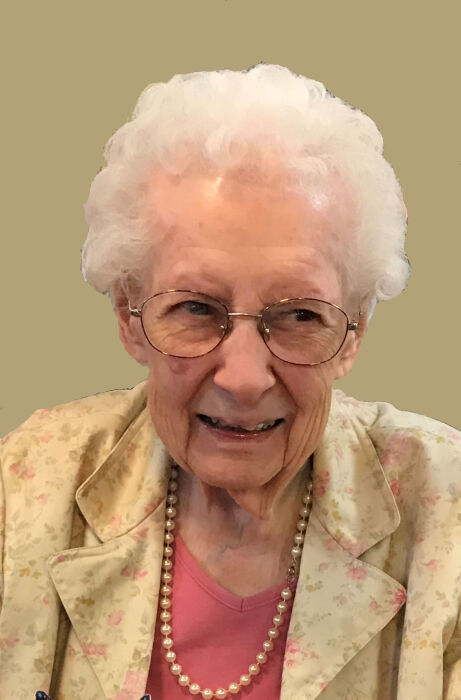 Joyce Ninneman, age 93, of Ortonville, MN, passed away on Tuesday, October 18, 2022, at Avantara-Milbank, surrounded by her family.

Funeral services will be held on Monday, October 24, at 2:00 p.m. at First United Methodist Church in Ortonville, MN. Visitation will be held from 12:00 p.m. to 2:00 p.m. at the church on Monday. Interment will be at Yellow Bank Emmanuel Cemetery in rural Lac qui Parle County, MN.

The service will be live streamed and recorded will be viewable at the bottom of this page.

Joyce Maxine (VonEschen) Ninneman was born on March 23, 1929, to Ernest and Mamie (Dallman) VonEschen on their farm north of Ortonville, where she grew up. She was the second born of five children.

Joyce graduated from Ortonville High School with the Class of 1947. She later met and fell in love with a handsome farmer who adored her brown eyes, dark hair, and strong, yet gentle demeanor. Bill knew they were meant for each other and proposed to her on July 4, 1950. They were married on June 22, 1951, at the Methodist Church in Ortonville. Bill and Joyce were eventually blessed with five children while living on their farms south of Ortonville. Being a mother was a role which provided Joyce with much joy. She was an excellent mom and homemaker, dedicated to the success of her children and husband.

Before marriage, Joyce enjoyed employment at the local Ben Franklin store in Ortonville. When her children became teenagers, she returned to work part time at Gibson’s and Value Variety Stores for several years.

Joyce is remembered fondly for her skills of gardening, canning, and freezing her produce. She enjoyed the presence of birds and butterflies in her gardens. Most Sunday mornings she was up before anyone preparing the noon meal of the most delicious roast beef or fried/baked chicken. Joyce continued the Ninneman German tradition by making peppernuts each Christmas. She loved to bake and we will forever long for her amazing brownies with chocolate fudge frosting! Yum!

Joyce became a grandmother in 1974, a new role which she wholeheartedly embraced. When the grandchildren visited the farm, she showered them with love and made sure each one knew they were special.

As a young adult, Joyce accepted Jesus as her Savior at the nearby Yellow Bank Campgrounds with Bill at her side. She enjoyed being active with her church: attending worship, participating in various ladies’ groups, teaching Sunday School, and singing in the choir. She and Bill were sure to bring their five children to Sunday School and church every week which helped to instill strong Christian values for their family. Throughout her life, Joyce was an avid reader. She enjoyed magazines, devotional books, and the Bible. Even in her most recent years, when reading became more difficult for her, she always had her Bible by her side. Simply having God’s Word near seemed to provide Joyce with strength, and the reassurance she would soon be “Filled with His Goodness, lost in His Love.”

After Bill’s death in 1993, Joyce insisted she remain on the farm, which she did until 2014, when her health declined. She relocated to Northridge in Ortonville, Park Place Assisted Living in Milbank, and eventually Milbank Avantara Nursing Home.

She was preceded in death by her husband, William Frank Ninneman; her parents; brothers: Lyle, Jerald, Eugene; and sister, Dorothy (Allen) French.