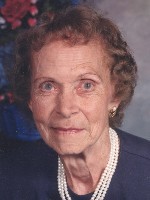 Visitation will be at the church on Wednesday, two hours prior to the Mass.

Father David Breu will celebrate the Mass and burial will be in the St. Mary's Catholic Cemetery. Casket bearers will be her sons: Gary, Steve, Mike, Kevin, and Tim. Honorary bearers will be the Staff of Grace Home.

Joyce Delia Doschadis was born on February 9, 1930, in Foxhome Township, Wilkin County, Minnesota to John and Anna (Ostlund) Toso. She was raised Lutheran and then was baptized into the Catholic Church on June 16, 1947. Joyce graduated from high school in 1947.

On July 10, 1947, Joyce and Raymond Eugene Doschadis were united in marriage in Browns Valley, Minnesota. They lived near Lake Traverse for a while, and then moved to Babbitt, Minnesota. Two years later they settled in Beardsley, Minnesota. Joyce and Ray were blessed with five children. Joyce worked at Phyl's Cafe in Beardsley, Holy Trinity Hospital as a nurses' assistant and at Beardsley Public Schools as a cook and a janitor. Ray died in June of 1997.

Joyce was a member of St. Mary's Catholic Church in Beardsley where she was a member of Daughters of Isabella. She was also a member of the American Legion Auxiliary. As a member of the Hee Haw Gang, Joyce played guitar and sang with this group, bringing joy and laughter to many. She enjoyed fishing with Ray. Joyce really liked people and enjoyed a great party. Joyce was a devoted mother and her family meant a lot to her.

Joyce died on October 18, 2014, at Grace Home in Graceville, having reached the age of 84. She will be deeply missed.