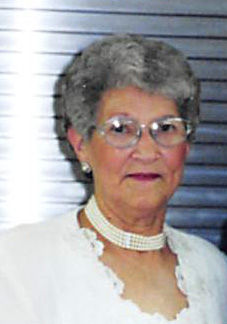 Funeral services will be held on Friday, March 5, 2021, at 10:00 a.m. at First English Lutheran Church in Ortonville. Burial will be at Mound Cemetery. A dinner and fellowship will follow at the Big Stone American Legion. Cupcakes will be provided by Joan’s Circle #4. Visitation will be held on Thursday, March 4, from 5:00 to 7:00 p.m. at the church, with a time of remembrance starting at 6:30 p.m. Visitation will continue Friday, one hour prior to the funeral service. Rev. Melanie Reiners will officiate.

While maintaining social distancing guidelines, we are now able to gather for services. The use of face masks by attendees is required.  For those who prefer or require continued precautions, webcasting and livestreaming will be available at the bottom of this page.

Joan Lee Block was born on October 30, 1931, to Charles Leslie and Geneva Alice (Stanton) Beachem in Tripp, SD. The family moved to Minnesota in 1936. Joan attended country school in Otrey Township, District 42, and later graduated from Ortonville High School with the Class of 1950.

On June 11, 1950, Joan was united in marriage to the love of her life, Marvin Block, at the home of Joan’s parents in Otrey Township, MN. Together they were blessed with 66 years of marriage and four children: Mark, Dawn, Ronda, and Ginger.

Joan was a wonderful farm wife and homemaker. She and Marvin worked south of LaBolt, SD, and Akron Township, MN, before moving back to the Block homestead where Marvin was born. She and Marvin worked and raised their family side by side until they moved to Ortonville, MN, in 1986. Joan was known as a hardworking woman who could throw bales and keep up with the men.

Joan and Marvin were members of Emanuel Lutheran Country Church and later joined First English Lutheran Church in Ortonville in 1960 when their rural church was closing. Joan served as Sunday School Superintendent and Chair of the 4-H food booth. She was a lifetime member of the Disabled American Veterans (DAV) and VFW Auxiliary.  Many remember Joan as the “Avon lady”, selling Avon products for several decades while her grandchildren remember receiving a box filled with Avon items specially chosen for each grandchild at Christmastime complete with an annually marked Avon pewter ornament which she made sure every grandchild received right up to this last Christmas.

Joan and Marvin were active volunteers in the local community. She volunteered at the Big Stone County Food Shelf, Meals on Wheels, and was a volunteer driver. She and Marvin strongly believed that with every day the good Lord gives you, you get up and work to do your part and make this world a better place. They also enjoyed traveling, including a trip to Norway in 1984 and trips reaching all 50 states except Hawaii.

Joan cherished her children, grandchildren, and great-grandchildren, taking pride in hosting generations of visitors on any given day often treating them to a freshly made dessert. Joan also hosted year after year of holiday gatherings for her family that included lutefisk and lefse, baked countless apple desserts from the 13 apple trees out on their farm, and served many batches of pancakes over the years.

She was preceded in death by her husband, Marvin; parents: Charles and Geneva; sisters: Bliss Gerjets and Helen Ludeman; and brothers: Howard Beachem, Ward Beachem, and Dale Beachem.

Please see our Resources page for a list of local florists.