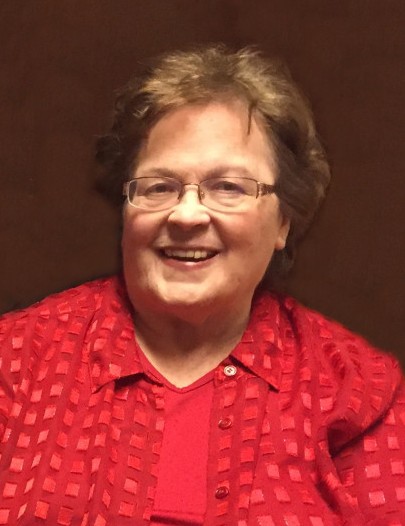 Jeanette Kaercher, age 80, of Ortonville passed away on December 1, 2019.  Funeral services will be held on Friday, December 6, at 11:00 a.m. at Abiding Faith Free Lutheran Church in Ortonville.  Visitation will be held at the church on Thursday evening from 5:00 p.m. to 7:00 p.m.  A prayer service will be held at 7:00 p.m.  Burial will be at a later date at Mound Cemetery.

Jeanette Rose Buechler was born in Minneapolis on July 27, 1939, the second of eight children born to Adolph John and Eleanor Anna (O’Neil) Buechler of Northeast  Minneapolis. Jeanette was the eldest daughter and had four brothers and three sisters. The four older children were born before World War II and the four younger siblings were born after Adolph returned home from the war.

As a young girl, Jeanette enjoyed traveling to Blue Lake to her Aunt Peggy’s cabin where she could swim, catch and play with frogs.   She spent special time with Aunt Peggy frequenting the 12th floor restaurant at Dayton’s Department store in downtown Minneapolis.  In high school Jeanette babysat and worked as a car-hop at Davey Crockett’s Drive-In where she donned a coonskin cap as part of her uniform.

Jeanette attended Edison High School and graduated with the class of 1957.  Following graduation, she worked at the Federal Reserve Bank in downtown Minneapolis.  It was there she became an independent woman and learned her clerical and financial skills.

Growing up Jeanette enjoyed listening to the Minnesota Twins baseball games on the radio with her father, A.J. This started her lifelong interest in sports and she continued to be an avid fan of the Twins, Minnesota Vikings and Minnesota Gopher football and basketball teams.

It was on her way home from a Minnesota Gopher vs. Wisconsin Badger football game that Jeanette met Jim Kaercher.  She was enjoying conversation with a girlfriend on the train back to Minneapolis when Jim being smitten with her beauty, approached her and engaged her in conversation.  She was somewhat annoyed with his persistence  and interruptions.

Jim was co-owner, publisher of the Ortonville Independent in Ortonville and made frequent, weekly trips from Ortonville to Minneapolis for business and to court Jeanette.  The two eventually eloped and wed at the Little Brown Church in the Vale in Nashua, Iowa on May 26, 1962.  They made their home in Ortonville.  Jeanette transitioned from big city gal to small town girl.

To this union were born three daughters:  Collette Marie, Suzette Jone and Sara Jayne.  Jeanette enjoyed being a stay-at-home mother and was instrumental in raising her daughters.  She taught them Christian values, helped them with homework, studying, made sure they practiced their musical instruments, drove them to numerous school events and friend’s houses.  She also was known to give many of the girls’ friends rides home from Mr. Bud’s after late night sporting events – often arriving in her pajamas and curlers.  She was a fun mom and a good sport and many of the girls’ friends thought of Jeanette as a second mom to them because of her kindness and good nature.  Jeanette enjoyed having kids around and invited them up to the house to swim, build forts, play ping pong, billiards, have backyard carnivals with the horses host one-act plays and welcomed them to stay overnight.  She also was a host mom to Irene Bouas, an exchange student from Corfu, Greece. She was a caregiver at heart and welcomed the idea of moving the family in with her father-in-law, Lem, to care for him in his aging years.

Jeanette and Jim were active in the Jaycees as a young couple, were members of the Masonic Lodge and Order of the Eastern Star and were active members of the Ortonville United Church of Christ Congregational Church.  Jeanette was active in the Church Circle and assisted with numerous potlucks.  She played Bridge twice a month with some of her longtime friends for over 50 years.  Jeanette was an excellent hostess, co-hosting pool parties and barbeques with Jim for friends, family and Independent employees.  She hosted an annual Buechler family reunion where relatives came out from Minneapolis and others traveled from Seneca, SD area to meet halfway.

Jeanette enjoyed boating and waterskiing in her early married years and was an avid bowler playing initially on teams at the original Ortonville Granite Lanes in downtown Ortonville and later playing on a league at the Alley Cat Lanes.  For many years, Jeanette helped at the Ortonville Independent by inserting fliers and ads into the weekly newspapers.  She delivered the newsstand copies on Tuesday nights and hauled the bundles to the post office for mailing.  Eventually the girls also helped and it became a family affair.  She occasionally worked a Saturday here and there answering phones when needed to fill in, but her primary role was to be a loving mother.

Jeanette enjoyed traveling with her family, going to movies and being with her grandchildren.  She loved listening to music - attending concerts, especially musicals, going to Chanhassen Dinner Theater, and playing Name That Tune.  She was a trivia buff, often winning at Trivial Pursuit and loved helping Jim solve his daily crossword puzzles. It was fitting Jeanette married a newspaper man, because she read the daily StarTribune and weekly Ortonville Independent from cover to cover.

Jeanette was a calm, caring, kind-hearted soul who put other’s needs before hers. She was always available, never too busy, when her daughters, family or friends needed her.  She was strong in her faith and was a devoted wife, mother, sister and friend.