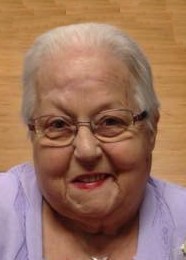 Funeral services will be held on Monday, June 22 at 11:00 a.m. at Zion Lutheran Church in Ortonville. Rev. John Ragan will officiate and burial will be at Mound Cemetery, Ortonville.

Visitation will be at Mundwiler and Larson Funeral Home, Ortonville on Sunday from 5 – 7 p.m. with a prayer service at 6:45 p.m. Visitation will continue at the church on Monday, one hour prior to the service.

Janiece Kay (Christianson) Larsen was born March 21, 1938, in Milbank, SD. She was the daughter of Ralph and Elizabeth (Folk) Christianson. Janiece grew up in Wilmot, SD and graduated from Wilmot High School. She was united in marriage with Quentin Larsen on March 10, 1956, in Webster, SD.

Janiece and Quentin moved to Big Stone City, SD in 1957 and moved to Ortonville in 1958. They were blessed with three daughters. Janiece worked as a grocery store clerk for ten years. She later worked in banking for 22 years. Quentin died on March 20, 1997. Janiece retired in 2001.

Janiece was a faithful member of Zion Lutheran Church and served in several offices and committees. She served as treasurer for the Salvation Army, Big Stone County for 21 years and treasurer for American Field Service (AFS) for 25 years.

Janiece loved to knit and crochet. She was a talented seamstress and took pride in sewing most of her daughters clothing. She was proud of her yarn, fabric, books, and craft items that she always had on hand. She enjoyed visiting with friends and having a cup of coffee with them. She and Quentin liked to "go for a drive" and enjoyed the beautiful scenery and wildlife in the Big Stone Refuge. She was also always ready to play a game of cards or dice.