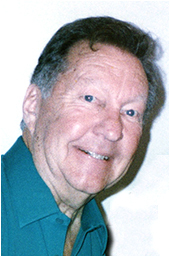 Ortonville and Big Stone County have lost one of their most colorful personalities, most avid businessman, and sportsman, with the passing last Friday, Dec. 19, 2014 of Jim Kaercher, 84, Ortonville native and longtime owner-publisher of The Ortonville Independent and The Northern Star weekly newspapers.

Funeral services will be held on Saturday, December 27, 2014, at 11:00 a.m. at the Abiding Faith Free Lutheran Church in Ortonville with Pastor Richard Larson officiating. Visitation will be from 5-7 p.m. Friday evening at Mundwiler and Larson Funeral Home in Ortonville with a prayer service at 7 p.m. Visitation will continue on Saturday morning for one hour prior to the time of service at the church. Burial will be held at a later date in Mound Cemetery.

James David Kaercher was born in Ortonville on April 23, 1930, the fourth and last son of Lemuel Amerman and Ruby Irene (nee Odney) Kaercher of Ortonville.

Jim graduated from Ortonville High School with the class of 1948, following which he entered Journalism school at the University of Minnesota main campus in Minneapolis. He graduated from the U of M in the Spring of 1952, with a Bachelor of Arts degree, majoring in journalism, minoring in music. He became a life-long member of Sigma Delta Chi Journalism Fraternity.

After college, Jim was commissioned a 2nd Lt. in the US Air Force, having completed his college course in Air Force ROTC. After his USAF commission, Jim spent six months training in the Army's top-notch Infantry School at Ft. Benning, GA, receiving his 1st Lt. ranking. From 1952 to 1954, Jim served as an instructor in Air Base Defense at Beale Air Force Base in Marysvillle, CA., following which he became a member of the USAF Reserve.

In 1954, Jim joined his father, Lem, as co-owner, publisher of The Ortonville Independent. The two purchased the Graceville Enterprise and formed the Northern Star with the merger of the Enterprise and the Clinton Advocate, the latter owned at the time by Dave and Lois Torgerson.

For a month in both summers of 1955 and 1956, Jim worked at WCCO radio in the Twin Cities, writing news and doing some air-time work for the late Cedric Adams. Jim was still owner-publisher of his two weekly newspapers.

In 1956, Jim joined the trio of Cy McCormick, Don Egert, and Dick Schultz all of Ortonville in establishing KDIO radio, starting in "The Little Red School House" a few miles north of Ortonville. Jim served as KDIO'S News Director, full-time, resigning after two years, returning to full-time with father Lem at the weekly newspapers.

It was during the early 1950's that Jim became a general aviation pilot, receiving his pilot's license from the late Bernie Blake, at Ortonville's city airport. For the next several years, Jim chalked up a tad over 3, 000 hours flying time, owning three single-engine aircraft, a two-seater Piper Cub, a four-seater Piper Cherokee 180, and a four-seater Mooney 180. He flew both for business and private matters.
In October of 1956, Jim was married in Ortonville to Shirley Ann Jensen of Portland, OR, whom he met at Beale AF base. The two were divorced in 1958.

In May of 1962, Jim married Jeanette Rose Buechler of Minneapolis at the Little Brown Church in the Vale in Nashua, IA. From this union, three girls were born, Collette Marie, Suzette Jone and Sara Jayne. In the following years, Jim and Jeanette were blessed with seven grandchildren from their three daughters, six boys and one girl.

In 1963, Jim and father Lem, an avid real-time hobo for much of his early life, started a new venture with Hobo Soup. After interviewing hobos in the Ortonville "Hobo Jungle" and being treated to their hobo stew, Lem and Jim formulated a recipe "Fit for a King" which was served by a local cafe. The soup was such a hit, that the pair commissioned the Ortonville Canning Company to mass produce it.

When Hobo Soup entered the nation's food market it was one of the first heat and eat soups. It was one of the top selling items in famous retail Vermont Country Store Catalog.
In 1965, Lem and Jim entered the system of printing newspapers by offset, in purchasing a Goss 3-unit press, adding a fourth unit a few years later, locating the press in Ortonville, across the street from where the original plant was located since 1920. Before long, The Independent began printing for several other weeklies, today totaling 20, and having moved the press to a new building on Highway 75.

In 2013, Jim sold his interest in Kaercher Publications to daughter Sue and her husband, Phil Blake, who had been pretty much managing the business since 2008 when Jim's health suffered a major set-back with a ruptured colon, requiring emergency surgery, a result, after several days unconscious, leaving Jim, as termed by his surgeon as "lucky to be alive," (for the third time in his life).

Golf was a favorite pastime for Jim, having played for the University of Minnesota Golf Team with a scratch handicap. He won many local golf tournaments throughout his lifetime.

Jim also had a most active life in music, singing solos at numerous weddings and funerals. Singing his favorite "Old Man River," Jim, in his early college days, won a March of Dimes contest on WCCO radio.