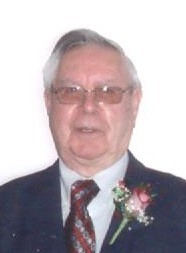 Funeral services will be held on Tuesday, February 17, 2015, at 10:30 a.m. at Zion Lutheran Church in Browns Valley. Visitation will be held at Mundwiler and Larson Funeral Home in Browns Valley Monday evening from 5 – 7 p.m. with a prayer service at 7. Visitation will continue one hour prior to the service at the church. Rev. Paul Warnier will officiate and Ginny Westbrock, Todd Johnson, and Jim Jung will provide music. Urn bearers will be Jay Ecker and Jeff Ecker. Honorary bearers will be the Browns Valley Fire Department and American Legion Post 58. Burial will be in Midway Cemetery.

James F. Ecker was born on July 11, 1927, to Howard and Josephine (Cress) Ecker on the family homestead in Woodside Township, Otter Tail County, Minnesota. He attended country school and Bertha High School. Jim served in the U.S. Army during World War II. After his discharge he worked as parts man at Best Motors in Webster, South Dakota, where he met and married Shirley Carlson on April 27, 1949.

Jim worked as a lineman for Davis-Hydaker of Ohio and Hallett Construction of Crosby, Minnesota. In 1952, he began employment with Otter Tail Power Company, retiring from there in 1989. While employed with Otter Tail, Jim and Shirley lived in several towns in North Dakota until they were transferred to Browns Valley in 1958. He was the service representative for Browns Valley and for the towns of Peever and Wilmot, both in South Dakota.

Jim was proud of the restoration he did on his father's 1935 McCormick-Deering corn binder and later donated it to the Thresher's Group in Dalton, Minnesota. He also spent a great deal of time building a scale model of his childhood homestead.

Jim was preceded in death by his parents; brother Vernon Ecker; and sister Myrtle (Tom) Tydlacka.