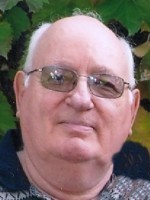 James Donald Loeschke was born on July 26, 1932, in rural Milbank, SD, the eldest child of Harold and Margaret (Kiern) Loeschke. He was baptized in Milbank, SD and confirmed at Trinity Lutheran Church in Ortonville, MN. Jim grew up on the family farm, attended school in Big Stone City, SD and graduated in 1950. He proudly served in the United States Army and was stationed in Europe.

Jim loved spending time with his family and friends. He was known for his sense of humor, especially teasing his grandchildren and playing practical jokes on his friends. He enjoyed genealogy, reading, the Minnesota Twins, playing cards, hunting, fishing, and daily crossword puzzles. Jim enjoyed trips to Germany with Darlene and fishing trips to Canada with his friends.

Jim passed away Friday, June 20, 2014, at the Ortonville Area Hospital with his wife and family at his side.

He is survived by grandchildren Carl and Kaila Zachmann of Fergus Falls, MN; Brian and Steve Loeschke of Viernhiem, Germany; Sarah and Grace Loeschke of St Louis Park, MN; Nicole Gellner of Ortonville, MN; and Jimmy Loeschke of Elberton, GA.

He is preceded in death by his parents Harold and Margaret Loeschke of Ortonville, MN.