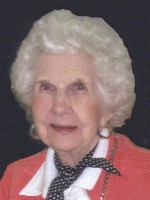 Funeral services for Isabel Wolner will be held on Wednesday, October 8, 2014, beginning at 11 a.m. at First English Lutheran Church in Ortonville.

Visitation will be from 9 – 11 a.m. that morning at the church. Rev. David Tonn will officiate. Marilyn Hanson will be the organist, with Jim Foster as vocalist. Casket bearers will be Nick Wolner, Phil Ziegler, Larry Ninneman, Duane Ninneman, Dan Hasslen, and Paul Strong. Honorary bearers will be Kent Gustafson, Lee Gustafson, John Gustafson, and Jerry Hanratty. Burial will be in Mound Cemetery.

Isabel Lorraine (Gustafson) Wolner was born April 10, 1919, at home in Clinton, MN. She was the daughter of Albert and Lydia (Erickson) Gustafson. She attended elementary school and high school at Clinton, MN, graduating in 1937, after which she attended the Minnesota School of Business in Minneapolis. After completing her business training she moved to Ortonville, MN and was employed by the Big Stone County ASC Office and later for the Farm and Home administration for six years.

On October 7, 1942, Isabel was united in marriage with Clifford P. Wolner of Ortonville at Fredericksburg, VA. Cliff was in the military service for three years and upon his return the couple made their home in Ortonville where he was employed at the post office.

Isabel and Cliff were blessed with two children, Anna Christine (Tina) and Stephen Neil. When the children were older, Isabel returned to work and worked for the S & B Motor Supply in Ortonville for several years. She was a faithful member of First English Lutheran Church and was very active in church activities, serving on a number of church boards. Isabel was active in the RSVP program, Eastern Star, Sons of Norway, and County Welfare Board. Isabel also enjoyed Girl Scout work and community affairs. Collecting antiques was a favorite hobby. She also enjoyed decorating, cooking and entertaining. Isabel was an avid reader and enjoyed playing bridge. She loved socializing and being with people.

Cliff died on December 17, 1985, after having suffered several years from cancer. Isabel died on October 5, 2014, having reached the age of 95 years.

Isabel was preceded in death by her parents; husband, Clifford; son, Stephen; brothers: Robert and Charles (Polly) Gustafson; and numerous brothers-in-law and sisters-in-law.

In lieu of flowers, the family suggests memorials be given to First English Lutheran Church – Day of Love.