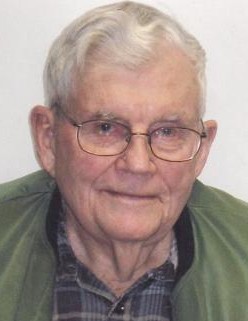 Harold LeRoy Haugen, age 88, of Clinton, died February 2, 2018, at West Wind Village in Morris, MN. Funeral services will be held on Tuesday, February 6, 2018 at 10:30 a.m. at Elim Free Lutheran Church in Clinton.  Rev. Richard Larson will officiate.  Visitation will be held at Mundwiler and Larson Funeral Home in Clinton, on Monday, February 5 from 5-7 p.m.  Inurnment will be held at the Clinton City Cemetery. The organist will be Kathy Moberg.  The urn bearer will be Matthew Abel, and honorary bearers will be: Kyle Haugen, Kurt Haugen, Sara Abel, and Anna Abel.

Harold LeRoy Haugen was born in Almond Township, Big Stone county, Minnesota on February 26, 1929, to Henry and Esther (Gustafson) Haugen.  As a child, his family lived on several farms in the area before settling on a farm between Clinton and Graceville.  He was baptized, confirmed and was a lifetime member of Elim Lutheran Church in Clinton.  He attended school and completed the 8th grade and then farmed with his father.

Harold was drafted into the U.S. Army, he served in a non-combat area of Korea, and was honorably discharged on July 23, 1955.  After his service, he returned to the family farm and  continued to farm there until his retirement.  He raised corn, beans, grains, hogs, sheep, and cattle.

Harold met Delores Forssell on a blind date, they were married on June 23, 1963, in Hartford, SD.  They were blessed with two children, Paul and Linda.  Harold was a member of Rural Youth, Campbell Williams American Legion Post #258, Big Stone Ye Olde Power, Machinery Club, delivered Meals on Wheels, and a Clinton Shipping Association Officer.   He enjoyed fishing when he had time, wildlife, especially pheasants, dogs, reading magazines, country music, homemade lemon pie, and growing and eating home grown tomatoes.  He kept an immaculate yard and loved going for coffee.  He also serviced on the church board and mowed lawn at the church.  Family was important to Harold, he especially loved spending time with his grandchildren and was very proud of them!