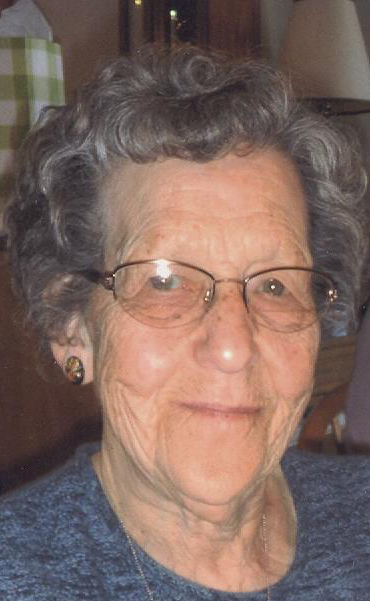 Grace Henkelman, age 93 of Ortonville, passed way peacefully on November 12, 2017, at Fairway View Communities. Funeral services will be held on Thursday, November 16, at 10:00 a.m. at Trinity Lutheran Church in Odessa. Rev. Dennis O’Neill will officiate and burial will be at Trinity Lutheran Cemetery. Visitation will be held on Wednesday from 5 - 7 p.m. at Mundwiler and Larson Funeral Home in Ortonville, and will continue at the church on Thursday, one hour prior to the service. Casket bearers will be: Kyle Baynes, Jordan Henkelman, Benjamin Henkelman, Dylan Wittmeier, and Matthew Karels. Honorary bearers will be the staff and residents at Fairway View. The organist will be Pat Radtke.

Grace Doris Stock was born October 26, 1924, in Thief River Falls, MN. She was the daughter of Paul G. and Bertha (Pomerenke) Stock. Grace lived on the family homestead near Goodridge, MN until the age of three, when her mother died. Grace was then raised by her paternal grandmother and Aunt Helen in Odessa, MN. Grace was confirmed on April 10, 1938, at Trinity Lutheran Church in Odessa. Her confirmation verse was Psalm 37:5, “Commit thy way unto the Lord, trust also in Him and He shall bring it to pass.” It has remained her favorite Bible verse.

Grace graduated from Odessa High School in 1942, and went on to attend Bethany Lutheran College in Mankato, MN. She worked as a bookkeeper for the Clinton Coop Oil Company until her marriage to Arthur Henkelman on September 27, 1953. Art and Grace were blessed with three children: Julie, Paul, and Mark while living on the family farm near Correll. In 1968 they moved to Odessa, where they lived for 25 years. While in Odessa, Grace worked for Agassiz and Odessa Mutual Insurance Company as an underwriter. When she retired, Art and Grace moved to Dassel Street in Ortonville, and in 2004, they moved to Fairway View Senior Living. Art and Grace were blessed with 55 wonderful years of marriage until his passing on November 19, 2008.

Grace cherished the time spent with her children, grandchildren and great grandchildren. She always enjoyed a game of cards, especially whist. Grace enjoyed gardening, canning and baking her famous banana bread to share with others. Grace loved visiting and sharing a cup of coffee with friends, traveling and listening to music. She had strong faith and lived her life by example. Grace was a faithful member of Trinity Lutheran Church in Odessa for almost 90 years. Grace's gentle and loving spirit will be greatly missed by all of her family and friends.

Grace was preceded in death by her parents, Paul and Bertha Stock; her husband, Arthur; two brothers: Lehart and Reuben Stock; one sister, Hulda Stock.