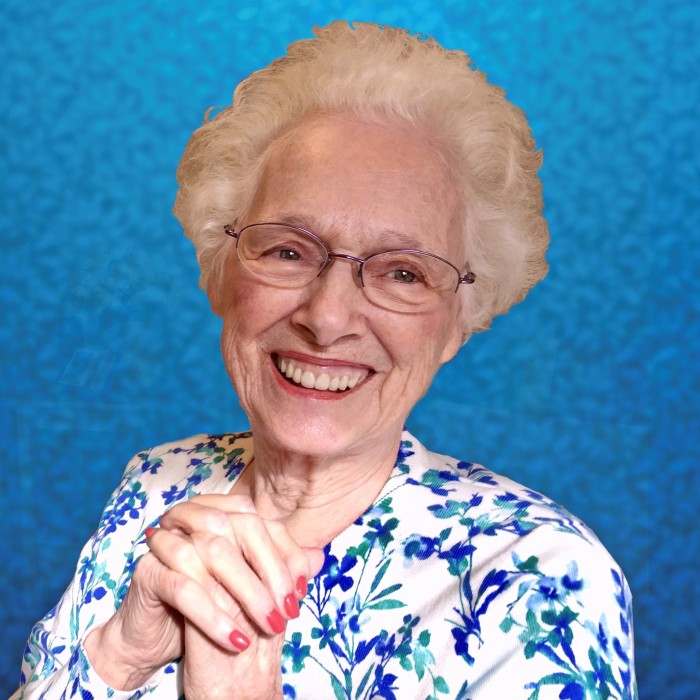 Gloria Lorrane Throndrud(nee Fauskee), 91, farmer’s daughter, teacher, volunteer, devoted wife, mother and grandmother, departed this life January 26, 2018. Gloria will be missed by friends and family who cherished her impish sense of humor, bright smile and zest for life. She possessed an unmatched drive, determination and work ethic. She was a sweet, kind woman who made out-of this-world-good lefse, flatbread, krumkake, and kransekake.

Gloria Fauskee was born September 10, 1926 to Albert & Marie Fauskee, both second-generation Norwegian immigrants. She grew up on the  family farm near Brooten, MN, which had no indoor plumbing or electricity until she left for college. She was one of six kids. Brothers, Abner, Donald, Dale, Waldo and sister Joanne received their elementary education in a one-room rural schoolhouse, speaking Norwegian before English.  After graduating from Brooten High School in 1944, where she was their very first Homecoming Queen, she pursued a teaching degree at St. Cloud Teachers College, graduating in 1946. Gloria taught fourth grade at Morton and Dawson Public Schools, remaining lifelong friends with several of her students who are now approaching 80! She continued her teaching career in Ortonville, primarily in Special Education, until 1997.

In Dawson, Gloria met the love of her life, Navy World War II veteran Elwood Throndrud. After their wedding in 1949, they resided in Dawson for six years and then moved to Ortonville, where they spent the balance of their 62-year marriage. Gloria and Elwood raised four children on the shores of Big Stone Lake: David, Susan, Mary and Nancy. Gloria was active in her church, First English Lutheran, and its volunteer services, particularly Day of Love. She also taught Sunday School and was a Girl Scout troop leader. Gloria helped establish Monarch Heights, a group home for the developmentally disabled in Ortonville and was a strong supporter of Special Olympics.  She also enjoyed bridge, golfing, eating Lutefisk and participating in the annual church Scandinavian Food Fair.

A memorial service will be held at First English Lutheran Church, Ortonville, MN, on February 3, 2018 at 11:00AM with visitation one hour prior.  Donations suggested to Alzheimer’s Association.