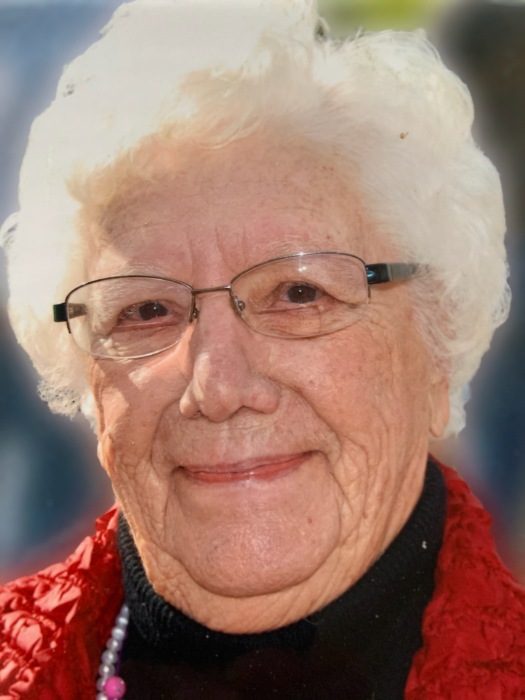 Gladys Howen, age 99, of Ortonville, MN, passed away the evening of February 10, 2021, at the Ortonville Hospital following a heart attack.

Gladys Elvira (Townsend) Nelson Howen was born on October 23, 1921, in a little log cabin within a forest near Arthyde, MN, to Albert Earl and Cora Mae (Munger) Townsend. At age eight, she traveled with her family by wagon and train to Graceville, MN, where she lived on a farm and graduated from Graceville High School. Gladys went on to graduate from Northern State Teacher’s College in Aberdeen, SD, and taught in a country school for one year.

She married Eldon Nelson in 1942 and was blessed with three daughters and two sons. During this time, Gladys was busy raising her children, helping on the farm with the chores, and serving as a 4-H leader for 20 years. After Eldon’s death, she purchased a department store in Clinton, MN, which she called, “Gladie’s”. While living in Clinton, she was very active in the community, Women’s Civic Club, was a hit in the town plays, and helped plan the bicentennial. She married Marvin Howen in 1969.

In the late 70’s they moved to Dawson, MN, and she opened a new “Gladie’s”. Following the sale of her Dawson store in early 80’s, she worked at the Dawson Bakery, and Dairy Queen, and then chose to get up at 4 a.m. to bake pies for Doug’s CO-OP Café. While in Dawson, she learned how to golf at age 70 and played in the women’s golf league. She also was an active member of the Dawson Chamber of Commerce.

She loved to travel and visited Europe with her sister, Carolyn. At the age of 79, she embarked on a solo trip to visit her son, Danny and his family in Singapore, returning again the following year with her son, Larry. Gladys retired from making pies at the age of 85, and at age 89, returned to Ortonville, MN, with Marvin to finish her retirement. She was an active member of Elim Lutheran Church in Clinton, MN, and in Grace Lutheran Church in Dawson, MN. She liked to email and FaceTime her friends and family from her iPad. Known by all for her competitive nature and spunky spirit, Gladys enjoyed attending sporting events, playing cards, playing Cribbage, board games, and Rummikub – she showed no mercy!

Gladys will be remembered for her delicious recipes, joy of knitting and crocheting baby blankets, gardening skills, and her green thumb. Spring was her most favorite time of year when she could plan and plant her garden. She advised every gardener to start their summer mornings deadheading and watering. In her 90’s, Gladys would proudly show everyone that she could still touch her toes and recite from memory the Gettysburg Address along with many other childhood school day poems!

Memorials will be distributed between the cemetery funds where her immediate family members are buried.

Blessed be her memory.