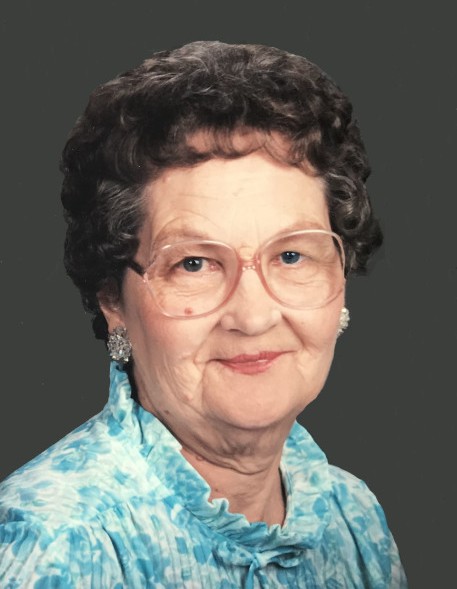 Funeral services will be held on Saturday, August 4, 2018, at 11:00 a.m. at Artichoke Lake Baptist Church in rural Correll, MN.  Pastor Tom Swartley will officiate and burial will be in Artichoke Lake Baptist Cemetery.  Visitation will be held on Friday, August 3, 2018, from 5 to 7pm at Mundwiler & Larson Funeral Home in Ortonville with a prayer service to follow.  Casket bearers will be: Terry Jorgenson, Justin Jorgenson, Travis Jorgenson, Robert Wood, Mike Stonefelt, and Taylor Pals; Honorary Bearers will be all of Gina’s grandchildren and great-grandchildren.

Gina Marion (Simonson) Jorgenson was born on April 13, 1917, in rural Swift Falls, Minnesota. The oldest of seven children, Gina grew up in the Benson area as a country girl.  She was baptized at Swift Falls Lutheran Church and attended country school through 8th grade.

As devoted Christians, Gina and Henning met in Artichoke and were married on October 24, 1937, at Artichoke Lake Baptist Church. They made their home in rural Graceville, where they raised six sons. They farmed in Graceville until 1999, when Henning moved to Northridge Residence in Ortonville.

Gina most enjoyed spending time with her grandchildren and was a busy homemaker. Gina spent many hours baking and cooking, along with sewing and embroidery work. Gina shared all her talents with her family, who especially loved her homemade buns, sweet rolls, and lefse. She was an active member of Artichoke Lake Baptist Church for 81 years.

Gina was preceded in death by her husband Henning in 1999; two great-grandchildren; her parents; sister, Irene Peer; and a brother, Stanley Simonson.

Our Mom, Grandma, and Great-Grandma was our family's cornerstone; she will be deeply missed.