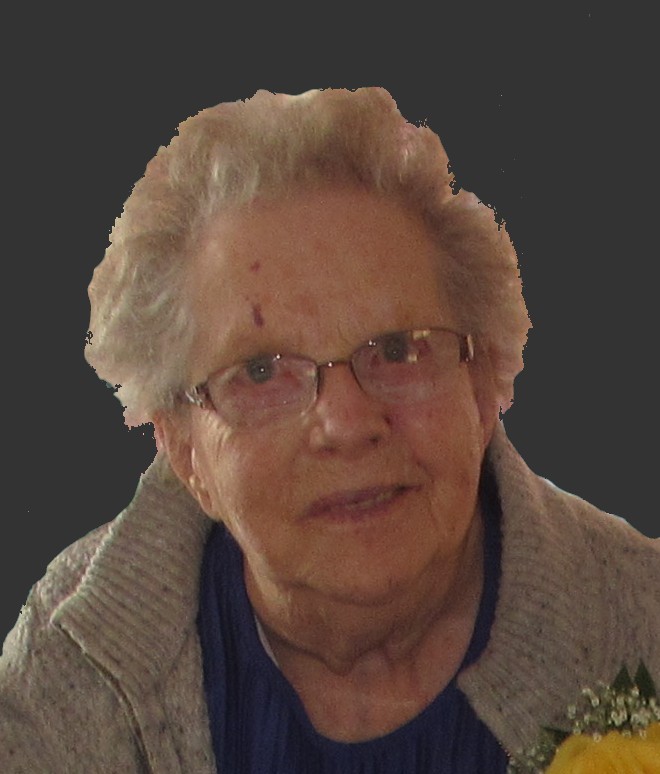 Funeral services will be held on Saturday, May 23, 2015, at 11:00 a.m. at Trinity Evangelical Lutheran Church, Johnson, MN. Rev. Eugene Andrus will officiate and music will be provided by Ruth Hoffman. Honorary bearers will be the staff and residents of the Grace Home, Grace Village, and Graceville Hospital. Casket bearers will be Armand Aswege, Marc Bjorklund, Paul Christeson, Bill Fuhrman, Bear Krieg, Grant Krieg, Josh Krieg, Mark Krieg. Burial will be in the Trinity Lutheran Cemetery.

Visitation will be at the church on Saturday, one hour prior to the service.

Georgia E. Krieg was born February 9, 1920, in Russell, MN. She was the daughter of Louis and Anna (Christensen) Johnson. She grew up in Russell, MN. Being the oldest child, Georgia took the place of "a boy" and helped her dad on the farm. She attended school at Morris Ag School where she met Richard Krieg. They were united in marriage on October 1, 1943.

Georgia and Richard lived on the farm where Richard was born and raised. They were blessed with three children: Barbara, LeRoy, and Lyle. Georgia spent her life on the farm helping with the farm work and raising their children. She also worked at the Hatchery for many years. She helped a bit in the flower shop in Graceville as well. Georgia spent many years taking care of Richard on the farm until he passed away on December 30, 1993. Georgia moved into town in 1997.

Helping in the community was always very important to Georgia. She was involved in Ladies Aide at Trinity Lutheran Church of Johnson, was a 4-H leader for over 20 years while her children were younger and she was involved in many clubs including the Birthday and Homemakers' Clubs. She also enjoyed helping out daily at the Graceville Senior Citizen Center until she moved to Grace Village.

Georgia was preceded in death by her parents, her husband, and one brother Louis.