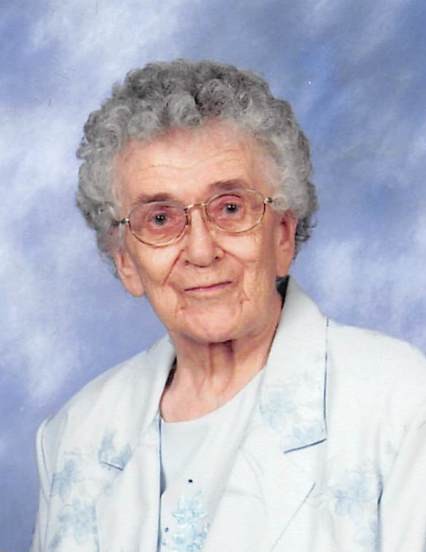 Funeral services will be held on Monday, November 18, at 1:30 p.m. at Tabor United Methodist Church in Big Stone City, SD.  Pastor Barbara McKewin and Rev. Melanie Reiners will officiate.  Visitation will be held at the church one hour prior to the service.  Burial will be in Greenwood Cemetery, Big Stone City.

Geneve Gay Comero was born on April 30, 1927, in Ortonville, MN.  She was the daughter of Lester and Ruth (Trapp) Comero.  Geneve was baptized at home by Pastor George Zech on June 30, 1927.  She attended Big Stone School.

As a young lady, Geneve worked for about ten years at Gowan Café in Ortonville. She was later employed at Big Stone Cheese Factory and Big Stone Canning Company.  In 1963, Geneve became the church janitor for Tabor United Methodist Church.  She retired in 1975.  She was a faithful and life-long member of the Evangelical United Brethren Church, which later became Tabor United Methodist Church.  She enjoyed being a part of the UMW.  She sang with the church choir and the community chorus and was blessed with a beautiful singing voice.  She was a long-time member of the Big Stone City Round Table Club.

Geneve was very proud to have been an 86-year member of the Big Stone American Legion Auxiliary.  She enjoyed being active and attending the Legion Auxiliary’s functions. Her hobbies included cooking, baking, playing cards, and visiting with friends.

She was preceded in death by her parents: Lester and Ruth; aunts: Florence Trapp and Rose Nelson; uncle, Paul Trapp Jr.; as well as other relatives; and Harry and Grace Russman, who were close family friends.