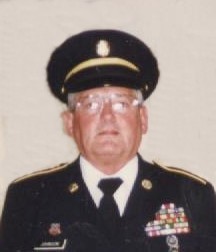 Gary Johnson, age 76, of Ortonville went home to his Lord Saturday, October 10, 2015, at the Ortonville Hospital.

Funeral Services will be held at 1:30 p.m. on Wednesday, October 14, 2015, at First English Lutheran Church in Ortonville with Rev. David Tonn officiating. Burial will follow in Mound Cemetery with military honors.

Visitation will be held from 5-7 p.m. Tuesday, October 13, at First English Lutheran Church with a prayer service at 7:00 p.m. Visitation will continue for one hour prior to the time of service at the church on Wednesday.

Gary Lloyd was born on March 29, 1939, in Tyler, MN to Lloyd and MeraLuciel (Peterson) Johnson. He was baptized on June 11, 1939, at the English Lutheran Church in Lake Benton. Gary was later confirmed into the Lutheran faith at the English Lutheran Church in Marshall, MN. Gary graduated from High School in Lynd, MN with the class of 1958. On April 22, 1961, Gary was united in marriage to Evelyn Edmundson Lake Wilson, MN.

Gary enlisted in the Army National Guard on his 18th birthday into Company L, 3rd Battalion, 135th Infantry Division in Marshall, MN. In 1968 he went full-time with the Marshall unit and was later transferred to Montevideo, MN. In the spring of 1968 he transferred to Battery C, 1-175th Infantry Division in Ortonville as a Federal Civil Service Technician. Among many things, he had trained exercises overseas in Norway and Korea, and was involved with the Minnesota/Norwegian Guard Exchange Program. During his career, Gary held many positions and he received numerous accolades and awards, the Meritorious Service Medal as his highest Army award. Also, he was accepted into the Ancient Order of Saint Barbara, the highest field artillery award presented.

Gary was a member of First English Lutheran Church in Ortonville. He was also a lifetime member of the VFW of Big Stone Lake Post #3964 and the American Legion Gertje Van Lith Post #229. Gary also belonged to the National Guard Enlisted Association and was the former president of the Ortonville Men's Golf Club. Gary enjoyed golfing, hunting and traveling. He liked most sports, but especially enjoyed watching the Viking and Gophers. Most important to Gary was his family and he cherished every moment spent with his wife, children, and grandchildren and was very proud of them.

Gary was preceded in death by his father, Lloyd Johnson.