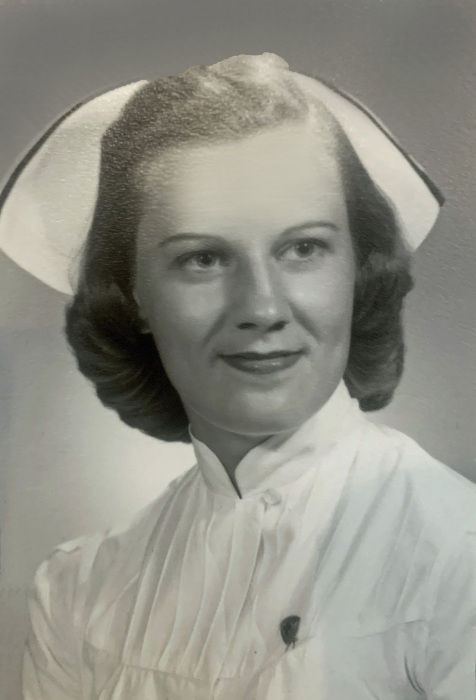 Gail Ann Gess (Ronnie) passed away peacefully on Monday, August 22, 2022 at the age of 91, at the Advantara-Milbank Nursing Home, in Milbank, South Dakota.

Funeral services will be held at the First English Lutheran Church in Ortonville, Minnesota on Tuesday, September 20, 2022 at 11:00 am. Visitation will begin at 10:00 am.  A light lunch will follow in the church dining hall.

Gail was born on October 26, 1931 to Marion and Joseph Ronnie in Cyrus, Minnesota.  She was the second of six children.   At a young age Gail moved with her family to Glenwood, Minnesota where Gail graduated from Glenwood High School in 1949. In the fall of 1949 she was enrolled at the Barton Nursing School in Watertown, South Dakota where she completed 4 years of schooling including a one-year hospital internship in Chicago, Illinois. Upon receiving her degree she moved to Ortonville, Minnesota to begin her long and successful career as a Registered Nurse (RN) at the Ortonville Hospital.

During this time she met and married her long-time husband and partner, Marvin "Bud" Gess.  Once married Bud and Gail moved to Minneapolis, Minnesota where Gail was employed at Eitel Hospital, a renowned hospital now cited on the United States National Historical Registry.  After 18 years at Eitel she joined Abbott Northwestern Hospital as an Intensive Care Nurse, RN.   Gail enjoyed her work and especially enjoyed the ability to meet and care for various patients including Mr. Verne Gagne, a famous professional wrestler of his time. Gail retired from Abbott in 1998 after a successful nursing career that spanned more than 45 years.

Aside from her beloved nursing career she raised 6 beautiful children; Debbie, twins Sharon and Karen, Doug, Paul and Jim.  She was an excellent cook and baker, always trying new recipes for her family. Gail had many passions in her life but the ones that meant the most to her were her children, dancing, sunbathing, reading, and watching the Minnesota Twins baseball and the Minnesota Vikings football games. Bud and Gail enjoyed their cabin on Big Stone Lake in Ortonville, traveling there often to entertain family and friends.  And to enjoy the lake where Bud would spend much of his time catching big Northerns. In 2016 they decided to sell their beloved family home in Bloomington, Minnesota and move full-time to Ortonville.  While in Ortonville they enjoyed being together in an assisted living home before moving to the Advantara-Milbank Nursing Home.  Sadly in March of 2019 Gail lost her beloved husband of 63 years.

She was preceded in death by her parents, Marion and Joseph Ronnie, her husband Bud Gess, her brother Marvin Ronnie, and her sister Betty Henriksen.

Rest in peace dear Gail, you served your life well.