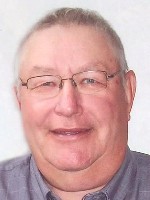 Mass of Christian Burial will be held on Friday, December 12, beginning at 11 a.m. at St. Lawrence Catholic Church in Milbank.

Visitation will be held at the church Thursday evening from 5 – 7 p.m. with a Rosary Service at 7. Father Gary DeRouchey will officiate.

Music will be provided by Nancy Johnson and the St. Lawrence Funeral Choir. Casket bearers will be Jon Smart, Dana Johnson, Mike VanLith, Donnie Johnson, Doug Schneck, and Luke Boe. Honorary bearers will be Frank's grandchildren, his friends, the Valley Queen milk haulers, and his cancer support group. Burial will be in St. Lawrence Catholic Cemetery.

Francis John VanLith was born on December 31, 1949, in Ortonville, Minnesota to Maurice and Lucille (Erne) VanLith. Growing up in rural Big Stone City, he graduated from Milbank High School in 1968. He served with the South Dakota National Guard. On August 16, 1969, Frank was united in marriage with Cheryl Johnson at St. Lawrence Catholic Church in Milbank. To this union seven children were born. They made their home in rural Big Stone City until 2009, at which time they moved to Milbank.

Frank was a dairy farmer and a milk hauler for Valley Queen Cheese Factory. He was a member of the Pork Producers and the American Dairy Association. A member of St. Lawrence Catholic Church, he was also involved with Knights of Columbus and achieved the 3rd degree.

Frank's hobbies included fishing and playing cards. His farm meant a lot to him. Frank was a hard worker and he instilled that strong work ethic in all his children. He was always there for his grandchildren and especially enjoyed attending their activities. Any time spent with his family was important to Frank.
Frank died on December 8, 2014, in Milbank, at Milbank Area Hospital – Avera, having reached the age of 64. He will be deeply missed.

Frank was preceded in death by his father, Maurice and his sisters, Janice and Kristy.

The family suggests memorials be given "It Only Takes A Spark" cancer walk.