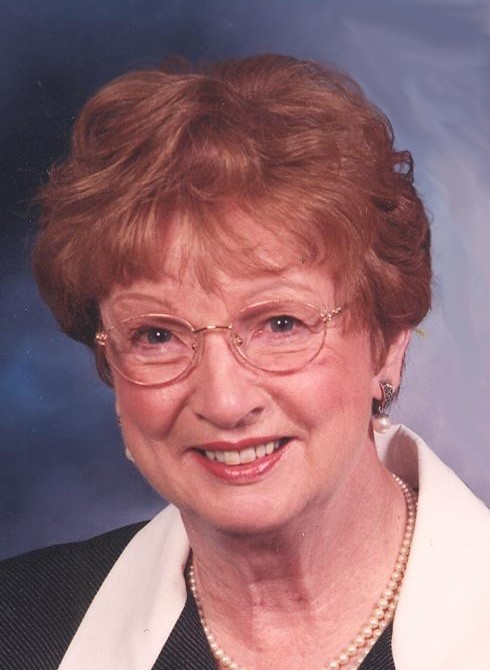 Mass of Christian Burial will be 10:30 a.m. Monday, July 20, 2015 at Holy Rosary Catholic Church in Graceville with Father David Breu celebrating the Mass. Burial will follow in the Graceville Consolidated Cemetery. Visitation will be held for one hour prior to the time of Mass at the church on Monday. Music will be provided by Deb Farwell, organist, and Chris Weick, Deb Stueve, Jean Costello, and Sandi Bauer, vocalists. Casket bearers will be Joyce's grandchildren. Honorary bearers include her great-grandchildren and the Grace Home Staff and Residents.

Frances Joyce was born in Bathgate, ND on July 13, 1926 to Elmer and Kathleen (Capitan) Slagerman. She grew up in Bathgate, but also spent time in Seattle, WA where her father would be employed in the winter months. She graduated from Seattle High School in 1944.

Joyce attended two years of college studying Home Economics at the University of Minnesota which is where she met Chuck at the Newman Center. She taught 7th and 8th grade in Neche, ND for one year. Throughout her lifetime education was very important to Joyce, a value she passed on to her children.

Joyce was united in marriage with Charles (Chuck) Walters on October 1, 1949 and they were blessed with six children: Barb, Dee, Chuck, Jim, Julie, and Dan. Their first home was on a farm near Hallock, MN. In 1958 Joyce and Chuck moved to Graceville and settled on their farm where they lived until their retirement in 1985 at which time they moved into town.

Joyce had a varied work life and instilled a strong work ethic in her children. First and foremost she was a supportive farm wife and mother. Off the farm she worked as a librarian at the Graceville Public Library, as a secretary at the University of Minnesota Morris and was the manager of the Sunwood Inn in Morris. Following retirement from the farm, Joyce and Chuck built, owned, and operated Lakeside Bed and Breakfast for ten years where she was famous for her orange rolls. She was involved in many things – 4-H, American Legion Women's Auxiliary, bridge club, Lakeside quilters, and the Graceville Service Club. A member of Holy Rosary Catholic Church, Joyce taught religion classes. Hobbies included cooking, quilting (where she earned a grand champion ribbon at the Big Stone County Fair) and gardening, both vegetables and flowers. She thoroughly enjoyed people and most important was the time she spent with her family.

In lieu of flowers memorials to the Graceville Public Library are appreciated.