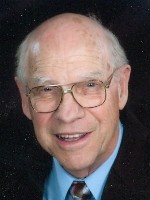 Ervin Elmer Mikkelson was born on November 21, 1933, in Sisseton, South Dakota to Elmer and Tilda Marie (Nelson) Mikkelson. He grew up in Canby, Minnesota, graduating from Canby High School in 1952. On August 1, 1954, Erv was united in marriage to Darlene Ochsendorf and they were blessed with three children.

Erv graduated from St. Olaf College in 1956 and that fall began a life long career in education in the Ortonville, Minnesota school system. He taught Physical Education and Health and coached football, basketball, baseball, track and golf. He also served as Athletic Director. Erv received his Master's Degree from South Dakota State University and went on to serve as Assistant Principal, Principal and Community Education Director.

In retirement years Erv was active in the leadership of Habitat for Humanity. A member of First English Lutheran Church, he also served in numerous roles in the mission of that church community. Lifelong hobbies included golf, hunting and fishing. Erv and Darlene enjoyed an active retirement in Green Valley, Arizona. Most recently he had acquired a love for Sudoku.

He was preceded in death by his parents; sisters and brothers-in-law: Hazel (Ted) Abel and Esther (Don) Millard; and brother-in-law Hans Strand.

In lieu of flowers, the family requests that friends consider a contribution to Big Stone Health Care Foundation or to a charity of the giver's choice.