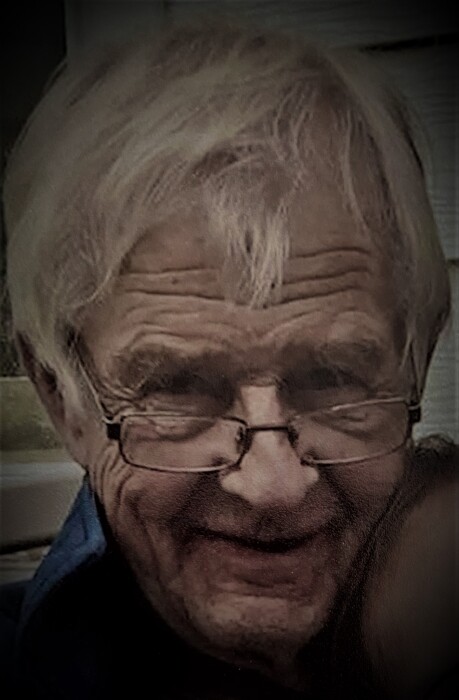 Farmer, Gardener, Musician, and Master Story-Teller, Ernie Tharaldson’s love of life did not come to an end with his death.  Ernie passed away on June 12, 2021, at the age of 85. In the end, he would have like to have it said that he died of “ripe old age”.  Ernie was surrounded by his family who will continue to honor his legacy by living their lives to the fullest; growing their gardens, singing, playing, even whistling all the while trying to outdo one another with their version of an Ernie fishing story.

Funeral services will be held on Saturday, June 19, 2021, at 10:30 a.m. at Trinity Lutheran Church in Clinton, MN. Visitation will be held on Friday, June 18, 2021 from 5:00 p.m. to 7:00 p.m. at Mundwiler and Larson Funeral Home in Graceville and will continue one hour prior to the service at the church on Saturday. Interment will be at East Zion Cemetery in Starbuck, MN, following the luncheon.

As Ernie would tell it, he was born “on December 18, 1935, in a snowbank in rural Pope County, MN”.  His parents, Ole and Alice (Olson) Tharaldson welcomed Ernie as child number five with six more to follow.  The family lived in rural Starbuck then moved to rural Brooten where Ernie worked on the family farm with his dad and siblings. Ernie graduated from Brooten High School in 1953. He served in the United States Air Force, then attended St. Cloud State University where he earned degrees in physics and math.

Ernie worked as an engineer for Collins Radio (Aerospace) and Burroughs, Corp. working on a variety of projects including building the communication equipment for the Apollo Missions. Ernie returned once again to Minnesota and began a new career as owner of Buh Oil in Pierz, MN, and Tee Oil Royalton, MN. Ernie served those communities for many years. The family moved to Graceville, MN, in 1988 where Ernie continued his work as business owner, designing distributing recognition awards for various organizations worldwide. Ernie was a 50-year veteran of the American Legion, serving as Commander for several years.  He was an active member and District Governor for the Lions Club.

It was at the Pierz American Legion that Ernie met love-of-his-life, Kathi Melin. Ernie and Kathi married on August 26, 1968, at Crow River Lutheran Church in rural Brooten, MN. Ernie often joked that the scripture carved into the alter, which also served as backdrop for their wedding photos, when translated from Norwegian to English said, “God Save Me”. Ernie and Kathi’s union produced four children, a whole lot of love, and more music than most are lucky enough to know.

The simplest pleasures brought great joy to Ernie. He had an uncanny ability to find happiness in his daily activities and interactions with others, if even just a wave. His smile was infectious and often left one wondering what he had up his sleeve. He will be dearly missed.

Ernie was preceded in death by his parents, Alice and Ole Tharaldson; brothers: Omer and Lon; sisters: Marjory, Jean, Irene, and Vicky.