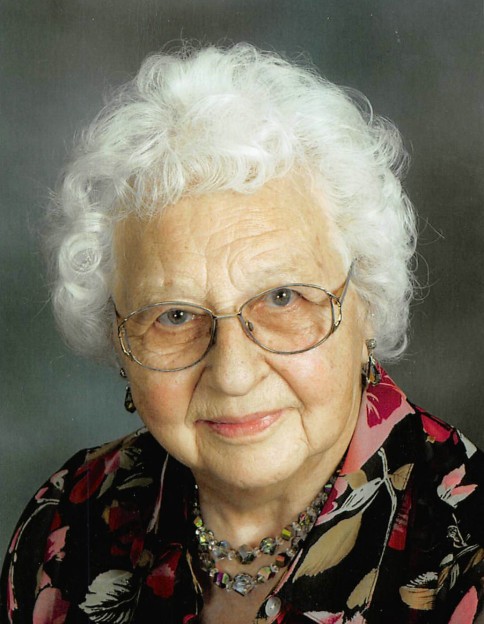 Funeral services for Eleanor Fuhrman are scheduled for Saturday, March 16, 2019, at 2:00 p.m. at Trinity Evangelical Lutheran Church in Johnson, MN. Rev. Eugene Andrus will officiate. Visitation will take place on Friday, March 15, 2019, from 5:00 – 7:00 p.m. with a prayer service starting at 7:00 p.m. at Mundwiler and Larson Funeral Home in Graceville, MN. Visitation will continue one hour prior to the service at the church on Saturday. A private family burial will take place at a later date in the Trinity Lutheran Cemetery in Johnson.

Eleanor Antonia Fischer was born on February 17, 1916, at the home of her parents, Emil and Ottelia Fischer in Leven Township, Pope County, Villard, Minnesota. She was the ninth of fourteen children and the last one living in her immediate family. She was baptized into the Lutheran faith at St. John’s Lutheran Church in Villard, MN, by Pastor Kritzschmeir on March 19, 1916. She was confirmed on April 26, 1931, with 1 Corinthians 6:20 for the sermon and “In the Hour of Trial” for the hymn.

Eleanor attended all 12 years of school at Villard Consolidated School and graduated on May 27, 1934. Because this was during the Great Depression, the school did not have pictures taken, hold a prom, go on a class trip, or offer class rings. The cost of rings at that time were $5 for silver and $10 for gold. Her brothers gave her $5 so she could get a ring on her own. After graduation, she did house work for several places and earned $2 a week. In 1939, she started working for Irvin and Doris Knoff at Wimpy’s Café in Glenwood where she baked pies, cakes, and cookies. She also cared for the Knoff’s three little boys.

Eleanor met Arthur Julius Fuhrman in 1933 at a Fischer-Fuhrman picnic. They dated for a while, but then she didn’t see him again until 1940. Art had stopped into Wimpy’s Cafe and asked her to go fishing. Since she was done working for the day, she agreed and her younger brother, Harold, joined them. They used their dad’s boat. They had good luck, and Art was able to take cleaned fish home. When they decided to get married, Art didn’t want to travel over the winter because he was concerned about the weather and long trip. Eleanor and Art were married on September 15, 1940, at St. John’s parsonage by Rev. Krazke in Villard. Art owned a farm one mile north of Johnson where the couple settled down. They were blessed with four children: Darlys, twins Lorna and Lorraine, and Gary.

In 1942, they were able to get electricity on the farm and lived there for 61 years. In 2001, they moved into Chokio, MN, as their grandson, Travis, moved to the farm. They had been married for nearly 65 years when Art passed away September 8, 2005. In July of 2008, Eleanor moved to East Side Acres and resided there until October of 2017. It was at this time that she moved to Grace Home in Graceville, MN.

Eleanor enjoyed sewing her daughters clothing, crocheting, needlepoint, gardening, cooking, baking, canning, hunting, and being in the Happy Hour Homemakers Club. The highlight of her life was spending time with her family and friends. Eleanor was known for her homemade bread and cinnamon rolls. Eleanor also liked to travel in her pick-up camper to Montana, Oregon, New York, Florida, and Wisconsin. She was a member of Trinity Evangelical Lutheran Church since 1940, where she was a member of Ladies Aid, sang in the choir, played hand bells, and volunteered many hours cleaning, painting, and refinishing in the church and parsonage. She was the secretary/treasurer of AAL for 38 years and treasurer for Thrivent Financial for Lutherans for an additional two years.

She was preceded in death by her husband, Art; parents: Emil and Ottelia; six sisters; seven brothers; and many in-laws, nieces, and nephews.