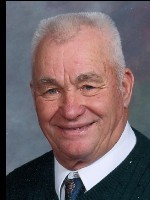 Funeral services will be held on Friday, February 28, at 1:00 PM at Zion Lutheran Church in Browns Valley, MN, with Pastor Paul Warnier officiating.

Visitation will be Thursday, February 27 from 5:00 to 7:00 PM, with a prayer service at 7:00 at the Zion Lutheran Church in Browns Valley.

Edwin Joseph Kuschel was born March 12, 1928, in Browns Valley to Edward and Bessie Boyd Kuschel.
He attended school at Grant 4 country school in Grant Township. As a young man he and his brothers farmed and hayed with horses. With their dad, they raised turkeys, hogs, milk cows, and beef cattle.

On June 5, 1954, Edwin married Darlys Labs at Zion Lutheran Church in Browns Valley. They farmed and lived in Grant & Bryant townships. During the winter months, he skinned fish. Edwin continued to raise grain and beef cattle on the farm until he moved to the Browns Valley Health Center in 2009.

Spending time with his family was always important to him. In his spare time he enjoyed pheasant, waterfowl, and deer hunting. He loved fishing in a variety of ways and places.

Edwin served on the Roberts County Ambulance board and held various positions on the church council.