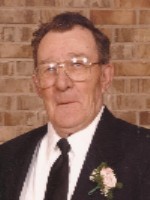 Mass of Christian Burial will be held on Thursday, August 28, 2014, at 10:30 a.m. at the Holy Rosary Catholic Church in Graceville with Father David Breu celebrating the Mass. Visitation will be held at Holy Rosary Catholic Church in Graceville on Wednesday evening from 5-7 p.m. with a prayer service at 7 p.m. and will continue for one hour prior to the time of service at the church on Thursday. Burial will be in the Graceville Consolidated Cemetery.

Dwane Franklin "Bub" Cardwell was born on January 23, 1935, in Wilmot, South Dakota to Cecil and Eva (Wunschel) Cardwell. He was baptized and confirmed on July 14, 1962, at St. Barnabas Catholic Church in Barry. Bub attended school in Browns Valley through the 8th grade. In 1955, Bub enlisted in the United States Navy, actively serving until 1959. In 1963, he was honorably discharged.

Bub was united in marriage with Verna Foley on July 28, 1962, at St. Barnabas Church in Barry. To this union, they were blessed with eight children. Bub and Verna lived along Lake Traverse while raising their family. They moved to Graceville in 1967. After moving to Graceville, Bub began working at Holy Trinity Hospital. He worked there until his retirement on May 5, 2003. Bub was a member of the American Legion Post #297, Ducks Unlimited, and served as a troop leader for the Graceville Boy Scouts Troop #26. He was also a member of the Graceville Fire Department for 20 years. Bub enjoyed being outdoors. He was a master gardener but also took pleasure in fishing, hunting, and camping in his bus. Bub also liked woodworking, bird watching, taking bus tours, collecting spoons and coins, and partaking in the Donnelly Threshing Bee.

Bub was preceded in death by his parents, Cecil and Eva; brothers: Donald; Darold; and Richard; and sister, Marcella Lenssen.