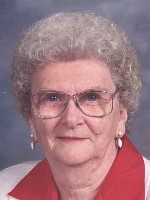 Dorothy Mae Tesch, daughter of Siert and Grace (Vogel) Folkens, was born on August 4, 1927, in Clinton, Minnesota. She was baptized and confirmed in the Clinton Methodist Church. She grew up east of Clinton on a farm. During summer months Dorothy would help nearby families with housework and childcare. Following her education she worked in Clinton as a waitress, a job she greatly enjoyed.

On June 3, 1948, Dorothy was united in marriage with Donovan Tesch in the Browns Valley Zion parsonage by Reverend Benger. They were blessed with one son, Eugene. Dorothy and Donovan lived in Beardsley for a short time and then moved to Blue Earth, Minnesota, living there until the fall of 1949 at which time they returned to live and farm on the Bion farm. Dorothy helped her husband with the farming and also worked at Foster Lodge and in Clinton at Bea and Ann's Cafe.

After retiring, Dorothy and Donovan enjoyed bus trips with Lawrence and Eleanor Findley. She really liked seeing so much of the country with her husband and dear friends. Dorothy also loved to crochet and made afghans for each of her grandchildren.

She was preceded in death by her parents; husband, Donovan, on December 2, 2013; sister Ione; and six brothers: Barnie, Ray, Orland, Carl, Jay, and Harold.